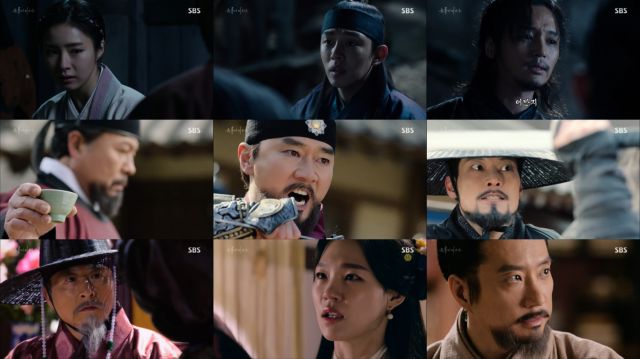 The focus is on adventure here, as lots of problems have been identified with no easy solutions. First off, Boon-yi needs to survive an icy standoff with a man who's main distinguishing characteristics are that he is excellent at fighting, and also he doesn't much care to identify himself. Once that matter is settled, it's on to more traditional action material as the dragons make an effort to hit the new strong point of their antagonists.

The action is strong as usual. I wondered at the time how Bang-ji and Muhyul could possibly one-up themselves after having defeated practically an entire army single-handed, and here we see their limits. It's one thing to kill someone who's willing to fight to the death- it's quite another to get a hold of a skilled combatant who doesn't want to be captured. Bang-ji himself used to pull that disappearing act all the time back when he was called Ttang-sae.

Although beyond that, some unsettling questions are raised by the fact that there really are legitimate Goryeo partisans remaining who would sooner commit suicide than accept any kind of change in the political situation. Do-jeon is having a lot of trouble coming to grips with this. Up until Seong-gye turned the army around it seemed like a given that of course anyone who wasn't evil would be on board with the New Joseon plan. Do-jeon has run into that awkward stage of dreammaking where a person realizes that people are bad at agreeing with each other.

On a mostly unrelated note, the mostly unrelated characters are still kind of...well, I'm having trouble remembering who they are and why they keep showing up mostly. Some incremental answers are offered here, but "Six Flying Dragons" is starting to stretch itself a little thin by having so many characters on so many unrelated tasks. Even the identifying subtitles aren't really much help at this point. Just keeping track of who's Goryeo and who's Joseon is difficult enough.

Everything does make sense, at least, particularly in terms of the larger revelations. It's just, there's such a thing as having a scenario so complicated that even if it's a good scenario, the difficulty of keeping track of what's going on makes the process less than perfectly enjoyable. Ironically that's also the lesson Do-jeon has been learning lately, although I doubt that this is an intentional meta-commentary on the part of the writing team.