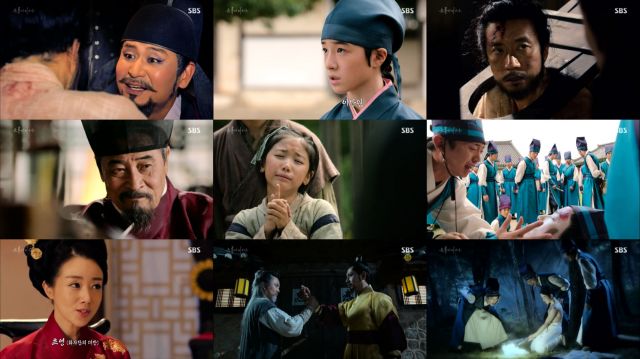 The apparent resolution of the political situation at the end of the last episode is quickly revealed to be only a temporary fix. The deranged people still control Goryeo, and predictably react to these setbacks through cruel, mindless, pointless torture. Bang-won doesn't even get to give a meaningful goodbye to his new friends before the characters are once again scattered to the winds. So the future king resolves that, for now, he's going to solve his problems by studying.

Don't let the initial cheery school atmosphere fool you. Getting an education under a close-minded regime may be better than the alternatives, but the situatio isn't great. If you thought modern-day bullying was bad, just imagine what that situation would be like if important parents and political backers could sweep any violent outrage under the rug. Well, that does still happen actually, but probably not in so spectacular and gruesome a way as what we see in "Six Flying Dragons".

At times I wonder whether this drama is too grim for its own good. By the end of the episode, though, we definitely get a clearer statement of purpose for who Bang-won is supposed to be as a main character. The kid has a serious dark side. Seong-gye's moral lessons about the harsh realities of war have evidently not had the intended effect. Rather than adapting a Buddha-like countenance that all suffering is to be avoided, Bang-won has decided that he has the moral imperative necessary to fight fire with fire.

This is some pretty brutal stuff. Even though the imagery never get cringeworthingly graphic, it's hard to see how the situation could possibly go any direction except much, much worse before it gets any better. From where Bang-won is standing, the blood gates are already wide open. The worst of it is that he has a pretty good argument. If Seong-gye is going to insist on acting indecisive, the other dragons have no choice but to take matters into their own hands.

"Six Flying Dragons" undoubtedly has epic pretensions, and so far the drama has excelled at meeting them. Bang-won hasn't even turned into an adult yet- so all you Yoo Ah-in fans are just going to have to be patient and wait for writers Kim Yeong-hyeon and and Park Sang-yeon to finish establishing all the important context. "Six Flying Dragons" has the polish and confidence of a production that knows exactly what it's doing.