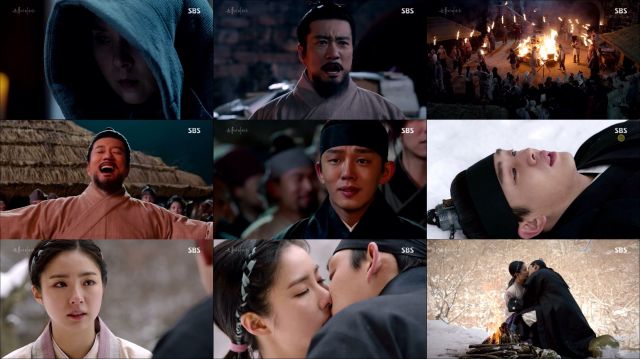 In addition to being heroic, Bang-won also manages to be quite noble. While it's easy enough for us to sit here in the future and question the efficacy of Bang-won's technique, in the immediate term Bang-won is always thinking in terms of self-sacrifice and personal appeal. The irony here is that Bang-won doesn't want to sacrifice himself in such a way that will make future sacrifice impossible. Bang-won can give up on Boon-yi and still live to fight another day. But it really is quite impossible to see how the fight for Joseon can succeed without Bang-won's continued assistance.

Dissension in the enemy ranks, for example, becomes a big plot point here. It's awkward how in the midst of all this high-stakes scheming "Six Flying Dragons" keeps reminding us how these antagonist characters, for all their flaws, are still people with similarly high-minded goals. That these goals are constantly mutually exclusive is besides the point. Everyone is struggling to protect what is dear to them. While they often fail, to them it's the effort that counts.

While the argument is a sweet one I'm not so sure it's all that convincing. As frustrating as Seong-gye was in the earlier parts of "Six Flying Dragons" with his refusal to react, increasingly I'm seeing why it is that this was always Seong-gye's go-to response. Seong-gye has seen firsthand what ambition can do and how it can destroy people. Even noble-minded characters like Do-jeon can end up going too far, as is demonstrated in the cliffhanger.

The burning is just...what a scene. Pay special attention to the facial expressions of the various characters. While the enthusiasm of the crowd is intoxicating, they're little more than a giant angry mob here. That's pretty serious cause for nervousness, yet Do-jeon is oblivious to all that's happening save for the glory. This is one of the first scenes in a long time where Do-jeon and Bang-won are both happy at the same time for the same reason, and given Bang-won's slide into darkness lately, that's a very worrying sign.

In light of all that, I sure am glad that Muhyul is around to provide comic relief every so often. He really is such a great character, with that dopey smile that can turn any bad situation into a fun one. Yet even there the taste is a bittersweet one. Muhyul, and most of the other supporting characters are used to following orders, not questioning them. And as we see demonstrated time and again, allies can be just as big a problem as enemies.