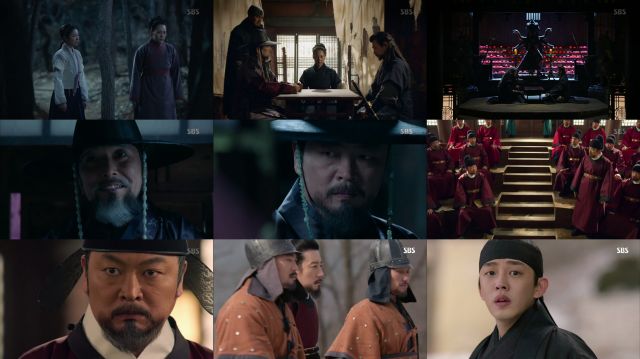 The overall tone of this episode is of waiting. No physical action, but lots of plotting and scheming. What's more, this plotting and scheming is not at the behest of the heroes. People are upset abut Do-jeon taking extra-legal action to deal with the land reform issue. It's ironic yet all too appropriate that they end up working rather narrowly within the confines of the law- and completely manage to blindside Do-jeon as a result.

The big problem with Do-jeon's grand theory of a state ruled by ministers is that ministers themselves can be manipulated, even if in theory ministers are easier to get rid of. But the bigger problem is that because ministers see themselves as smart, they don't necessarily see themselves as being capable of being manipulated. What makes the conspiracies in "Six Flying Dragons" so fascinating is that they have to spend a lot of time keeping their story straight in order to maximize support among a wide variety of groups.

By contrast, Do-jeon has always just been focusing on small groups or powerful individuals. To his credit Do-jeon has been picking important allies- Seong-gye could conquer the country overnight with his control of the military. But the tools being used to attack Goryeo are in complete opposition to the ideological nation Do-jeon wants to create. Look at Bang-won's face at the end. This is not the face of a man who responds to setbacks by being nice and friendly.

The idealism of the various characters in "Six Flying Dragons" is also a pretty consistently good contrast, because the more we learn about them the more clear it is that they're all idealists in different ways. Even generationally. The irony of Boon-yi's meeting with her mother is fairly inescapable. Both of them have given up on happiness for the greater good. But Boon-yi, the obvious intended long-term recipient of her mother's sacrifice, has instead managed to find herself making the same kind of sacrifice.

That these two characters are on different sides is rather besides the point, because that's not what love is about. Bang-won and Na-kyeong are on the same side. They even have the same temperament and they're also married. Yet Bang-won still has to talk himself into opening up to his wife. And of course it's a dramatic revelation rather than an emotional one. Do-jeon does manage to get both at the same time- although as we can see from his face, big revelations only rarely tend to be good news.