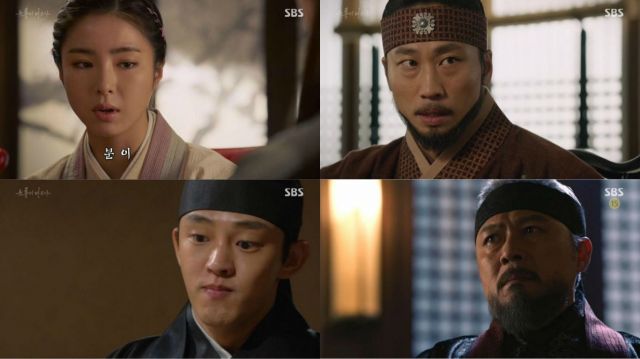 Mong-ju has made himself some rather powerful enemies by attempting to use a legal runaround to (eventually) kill off Do-jeon and eliminate the threat our intrepid dragon poses to the Goryeo regime. For those of you who have trouble keeping track of all the characters- Mong-ju is the respected minister with no particular allegiance to secret societies who is Do-jeon's spiritual and intellectual equal. It's for this reason that his betrayal especially hurts, and why Bang-won is unlikely to ever take an understanding big-picture appraisal.

Seong-gye does, in what definitely ranks as one of the episode's best scenes. What makes Mong-ju intriguing as a villain is that his reasoning is quite similar to Do-jeon's. It's always been negotiate, negotiate, negotiate, until Mong-ju is finally forced to admit that dictators can't be negotiated with. So he appeals to moral righteousness, and that can work when it needs to. But even then it doesn't work with the most truly violent characters. 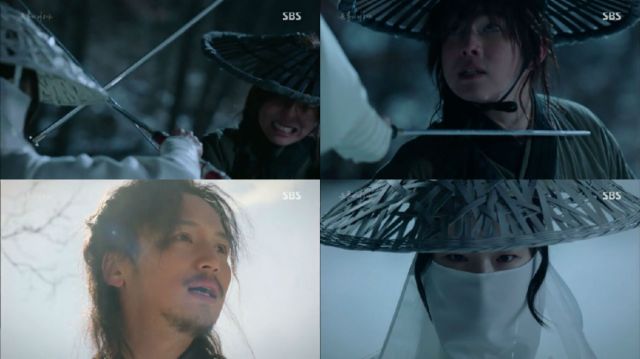 King Gongyang is quite relevant in this context, because while he is in theory an all powerful chief administrator of Goryeo, he has to be talked into everything. A brief quip Bang-won makes regarding birthright is an effective demonstration of how all the statecraft logic used in this drama is inherently arbitrary. They're all just different versions of stating that powerful people will be in charge, but their justification will be something that is not just might makes right.

Bang-won and his general practice of action before thought is helpful to note here because Bang-won genuinely believes that the strongest person in the room is who should be in charge. Most of the time that person happens to be Bang-won, so of course Bang-won himself has little issue is this. It's not even a bad philosophy considering that by the latter part of the episode Bang-won is the only character around with any ability to resolve the multiple crises that have popped up.

It's one of the more fascinating elements of "Six Flying Dragons"- how situations that woujld superficially appear to be best solved by modern democratic thinking inevitably end up being dealt with best via strict hierarchal management from a single person. Well, that and the swordfights. Also the elaborate planning that has to go into any plan if the participants want the slightest chance of success. But it's the emotional moments that really matter, when our important characters are finally able to get the resolve to make life-changing strategic decisions.