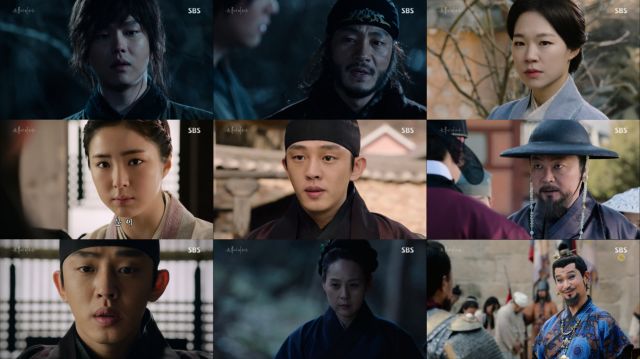 One problem with having the story of the founding of Joseon fictionalized with epic swordfights is that every so often we're left wondering why it is that the political leaders can't just rely on their hired muscle to solve every minor inconvenience. This episode tackles that problem by devoting much of the philosophical discussion to the question of why our lead characters fight. They're all in a fairly unnatural situation, really. Normally humans fight to live. In this case, living for the sake of living is not seen as enough.

Thematically the sentiment is a pretty obvious one, given previous storylines. But what can I say? Every time "Six Flying Dragons" tries to dress up the same old conflicts as something new, the cast always finds a way to sell the differences as being meaningful and epic. Part of this is just good rotation. While Muhyul never gets many dramatic moments when those chances do pop up, Yoon Kyun-sang always manages to nail them, like he's been practicing his life just for these few serious scenes.

It's a helpful perspective with which to view the sheer stubbornness of other characters. Do-jeon is completely right when he turns Bang-ji down. If Do-jeon was capable of leading a revolution on his own, he wouldn't have bothered with Seong-gye in the first place. I think Do-jeon was completely serious when he told Mong-ju to either kill him or die trying, Do-jeon doesn't want to live in a world where he can't achieve his dreams.

That scene is well-paralleled by another one here where Bang-won goes into full-on crazy mode, meaning every single word, because for him anything less than perfect success is a complete failure. Bang-won can't even let himself get angry or happy at the prospect of apparent imminent victory because he knows all too well that the high points do not last, and idealism isn't enough. Everyone in "Six Flying Dragons" is an idealist, and that's the whole foundation of the conflict. They idealize different things.

As a final note, for those of you who still have your character index cards from "Deep-rooted Tree", it might be worth looking at them once you've finished this episode. Admittedly, you might be a tad distracted what with the promise of a final, brutal showdown to end this phase of the story once and for all, complete with epic soundtrack to match, where characters are forced to put everything on the line for personal honor, wherever that might be directed. I won't fault you for needing a breather.