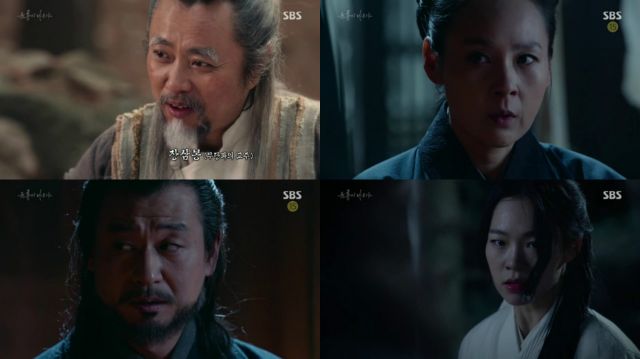 Compared to what usually happens when Bang-won goes maverick, there's actually quite a bit of genuine contrition this time. Bang-won has always operated under the assumption that the ends justify the means. But Mong-ju doesn't even put up a fight. This man has resigned himself to the whims of fate, and doesn't even appear to acknowledge the fact that theoretically there's a bodyguard who's supposed to be getting him to the palace safely. Mong-ju legitimately does not care, because that's how dedicated the man is to his ideals. 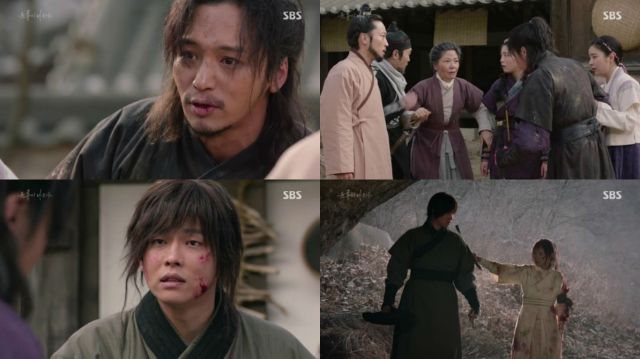 And how about those bodyguards? They've come a really long way for a fight that will be over in minutes, because no matter how good a person is at swordfighting, there's only so much they can do before inevitability takes its course and someone has to either win or lose. It's funny hearing Sa-gwang and Bang-ji described with these big lofty titles when in person, the two struggle in internal monologue with what they're doing. They're just so dispassionate- trying to think in utilitarian terms will somehow make the overall struggle easier.

It really doesn't. Which does explain, I think, a lot of Mong-ju's overall worldview, and his weirdl optimistic faith in broken systems. Killing Do-jeon, while obviously horrible and wrong, does at least have some sense of legitimacy when done under the auspice of a system that requires the approval of multiple people. Whereas who gave Bang-won the right to kill Mong-ju? Any power-hungry psychopath could have done what Bang-won did this episodes, and he knows it.

The fictionalized nature of "Six Flying Dragons" is especially rerlevant here, because in reality we do not know and we can not know whether the real Bang-won had any kind of sympathetic motivation. I suspect this was the ominous hinting we got from Mong-ju regarding the thousand years of Bang-won's evil destiny- a blood stain on his reputation that will never wash out. The bodyguards have it lucky. At least they have the luxury of choosing when to kill.