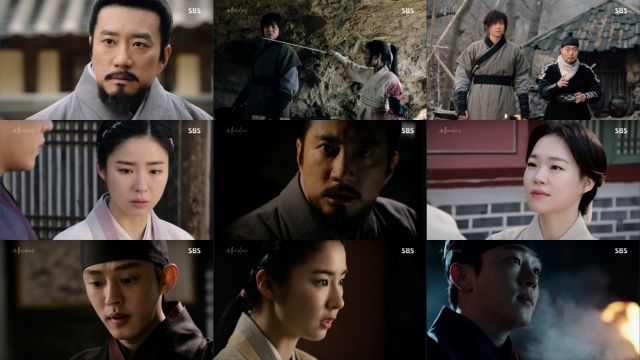 Bang-won spent much of the last episode agonizing over his decision to murder Mong-ju. By contrast, here he easily comes to term with the decision- for entirely the wrong reasons. Do-jeon's statement about how Bang-won has made his own unsavory place in the New Joseon plan was not intended as a compliment. Yet the farther away Bang-won gets from the original context, the easier it is for him to convince himself that he's just a guy making touch decisions.

This quite predictably spirals. A lot of it is the fault of Do-jeon and Seong-gye for failing to appreciate the reality of the power structure. Do-jeon's big worry this entire time has been that a Joseon founded on a throne of blood will lack legitimacy. Seong-gye hasn't wanted to become King because he does not see how his status as a general could possibly be reconciled with any moral precepts save for the idea that might makes right. Yet time and again might has been the most necessary quality keeping the dream of Joseon alive.

Mercy is a virtue, but it's not one that's ever rewarded. Take the conclusion of Sa-gwang's character arc. She always made a point of not killing people unless absolutely necessary. That sentimental bit of hesitation robbed Sa-gwang of a possible deathblow against Bang-ji, and it's only through dumb luck that Sa-gwang was able to achieve a somewhat happy ending. It's a relief that, for however brief a moment, some of the dragons were able to let some of their enemies surrender and leave.

But Bang-won is no such dragon. And for all the dragons, there's also the very real problem that scholars have simply been too disgusted by the overall bloodshed to want anything to do with the government at all any more. It's not even a matter of their preferring Do-jeon or Mong-ju. Both of them have been willing to condone violence for the sake of the greater good. That's antithetical to any notion of a nation ruled by men of moral character and higher intelligence.

Seong-gye's plan to just sit back and hope his sons listen to his requests that they be good princes who are seen and not heard comes off as naive at best in the light of everything that's happened. Do-jeon's willingness to trust important tasks to Bang-won even as Bang-won's independent actions have become increasingly unhinged hints at a similar problem. The dark side isn't a tool that can be brought out only when necessary. It's a practiced skill at which Bang-won is quickly becoming an expert.