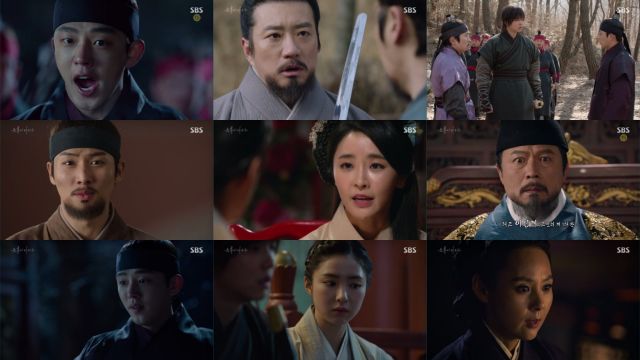 It's very tempting to just dismiss Bang-won's actions as being those of a crazy person. Unfortunately, what we're really seeing here is the culmination of a very slow burn. From the very beginning of "Six Flying Dragons" Bang-won has thought his way out of tough spots by acting generally impulsive and borderline psychotic. Back when the antagonists were more indisputably evil, this wasn't that big a problem. But here, Bang-won is using military force to subdue non-violent, principled scholars. The effects of this will be mixed at best.

Bang-won is, of course, blissfully unaware of this fact owing to his usual lack of intellectual curiousity. With that comes Bang-won's failure to realize that the whole reason why Do-jeon wants dissenting voices around is because it's entirely possible that at some point the main leaders of Joseon will be wrong about something, and when that time comes, they'll need that disagreement. People can't be bullied into giving sincere opinions. The explicit or even implied threat of force just makes them more scared to talk at all.

But the issue here isn't Bang-won alone. When Seong-gye is looking around at the people he can most expect to maintain order, those people end up being his sons- nearly all of whom are high-ranking professional soldiers, much like Seong-gye himself. One reason why Seong-gye was so reluctant to take power is because generals seizing governmental control sets a lousy precedent. While Seong-gye may be wise enough to know that he knows nothing, his sons lack such introspection.

Consider all the power plays Bang-won makes this episode, holding councils with former enemies under the assumption that they'll obey the guy with the most impressive military backing. Note how Do-jeon also takes Bang-ji around as protection, yet in that case Do-jeon always has to explicitly order Bang-ji to stand down because Do-jeon is making an emotional appeal to heart and minds. Bang-won is waving a sword at them.

The worst part of it all is that the militaristic attitude Bang-won adheres to has gained too many adherents to be shut back down again. Seong-gye's options for a possible crown prince to succeed to the throne are badly limited, because while Seong-gye has been hanging out with scholars, most of his sons are still soldiers through and through. While the solution offered to that quandary is clever, clever isn't going to be enough to beat Bang-won's grand coalition.