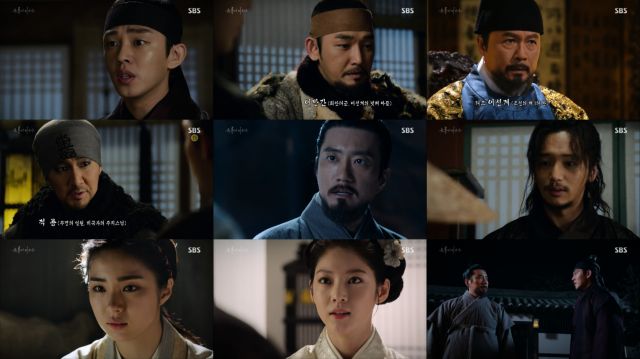 Given how so many of the characters in "Six Flying Dragons" are trying to pull off secret deals on an international scale, it was really only a matter of time before they accidentally ran into each other and alerted their opposites to what was happening. This is bad news for Bang-won's team, because his secret scheme has no official sanction. Do-jeon is, for all his greater ethical values, still working as an agent of the current King of Joseon. Bang-won hasn't even clued in all his brothers to what's going on yet.

Nor, for that matter, has he come completely clean to Boon-yi. That's a problem less because of Bang-won's goals and more of his process. Once again, Bang-won's team decides to kill a person just to be safe, and once more the results are less than ideal. Dead people don't talk, which means they can't be listened to. So forget about usable intelligence. All the dead person's team has learned is that they're dealing with a foe who can't be negotiated with.

Bang-won has yet to realize the irony of this situation, and he probably never will. Every bad situation the dragons have faced together was at its source created by a group of hardliners who were unwilling to brook any kind of discussion. Bang-won, still fixated as he is on the more recent death of Mong-ju, can't appreciate that Boon-yi's ultimate response to his dispute with Do-jeon is in fact the logical one. They're all supposed to be friends.

Well, they were friends anyway. Yet Bang-won's lack of helpful allies at the moment is getting to be more glaring with every episode. Technically the other young dragons are still uncommitted, yet none of them seem at all pleased with the new situation. What's more, Bang-won's unwillingness to negotiate has unsurprisingly translated into his faring rather poorly any time he does try to strike a deal with anyone. It's hard to imagine how Bang-won can escape the fiercely harsh implications of the cliffhanger.

I know how. Literally it's a part of the historical record, but metaphorically no one wants to actually kill Bang-won precisely because they have known him for such a long time and also know that his motivation is basically well-meaning. The problem is that with every apparent humiliation, with every new defeat, Bang-won becomes more desperate and less willing to hold on to any antiquated ideal of honor if the end result will be his own powerlessness. We're just left waiting for the explosion.