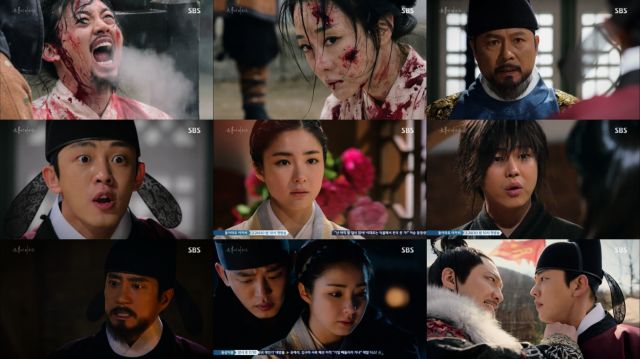 Bang-won's moral compass has been difficult to defend lately, although I was struck by how in this episode "Six Flying Dragons" rather subtly makes an important point- lately the ancient conspiracy hasn't really done anything all that bad. While these people are obviously not to be trusted overall, so far all Bang-won has done is talk to them in lieu of the fact that he can't talk to Do-jeon. In Bang-won's worldview, honor and respect are what matters and lately he hasn't gotten much of either from his actual or metaphorical father figures.

It's sadly unsurprising that the single best argument for Do-jeon's cold-hearted calculations ends up coming from Yeon-hee. What's worse, Yeon-hee's emotional scene is directed toward a character who is unlikely to have much more screen time given her current predicament. This, too, has been a frequently recurring theme in "Six Flying Dragons"- the characters most often seen as cruel-hearted frequently seem that way mainly because they only open up emotionally to a very small close group of confidantes.

Yet for all the gloomy undertones overall the cliffhanger ends up being on an optimistic note, as Bang-won gets a chance to go on an adventure that has little to nothing to do with the current political situation. It's weird to think that this is, technically speaking, a tactical mistake on the part of Do-jeon. Bang-won's self-esteem and confidence tend to go hand-in-hand with his greater ruthlessness and ambition. Time and again, Seong-gye needs Bang-won's hyper-competence more than he wants to do something as disgraceful as disown his own son.

Again, it does help that Bang-won hasn't done all that much lately that's all that bad. Do-jeon's plan works entirely because it's a dirty trick. That's what really offends Bang-won so much here- he's always seen the struggle against Goryeo as being a struggle against dirty tricks, and Do-jeon has betrayed those ideals. Bang-won's brazen attitude and flippant attitude toward cold-blooded murder may be frightening, but at least it's honest.

As interesting as Bang-won is I do have to admit that part of this is due to the other characters being a little static. Do-jeon has become unreasonably stubborn, Seong-gye is easily misled, and the other three dragons end up making big dramatic decisions to the effect that they're not actually going to make any big dramatic decisions, because life lately has just gotten way too complicated. It's hard to blame them, but even so.