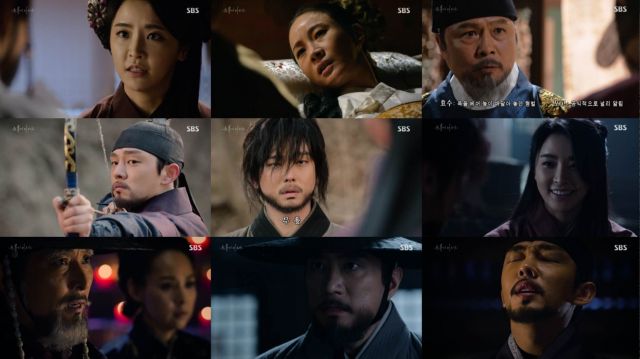 The rivalry between Bang-won and Do-jeon is stymied by one unfortunate problem- Bang-won and Do-jeon continue to act like this is just an interpersonal rivalry, where the goal is to dishonor and humiliate the other. That's not what's at stake here. Seong-gye has to constantly remind everyone that the entire future fate of Korea hangs on actions in the present day. Bang-won and Do-jeon are trying to win battles rather than the war, which is why one or the other keeps managing to slip away.

Let's consider Bang-won's scheme to ensnare Do-jeon in an ethical trap. Functionally speaking it's the exact same trick Do-jeon tried to pull on Bang-won, getting the would be crown prince out of Joseon and somewhere he could cause less damage. That didn't work because Bang-won's capable talents allowed him to survive a situation that probably should have killed him. Do-jeon's capable talents grant him similar avenues of escape. Both men have enough resources to avoid an apparent death blow- but most importantly they're creative thinkers, and have similarly gifted allies.

So now what? Are they really just going to endlessly circle around each other? No, because the allies are, at this point, sick of the constant stalling. It's weird how several of Bang-won's comrades seem to have a greater appreciation for the big picture than Bang-won himself does, when Bang-won is the one positioned for the greatest direct benefit. Yet Bang-won seems to enjoy political games just for the sake of fun alone. Even in pillow talk Bang-won can't escape the joy of constant scheming.

In many ways this makes Bang-won a basically sad character. His scene with Boon-yi here is perhaps the single greatest moment of genuine estrangement between the two, because it shows how even with Boon-yi, Bang-won is resigned to constant tactical scheming. This was once a woman with whom Bang-won could share the joys and agonies of his heart. But Bang-won's obsession with the plan has overtaken all other considerations. Bang-won is sacrificing humanity for efficiency.

It's not that bad a trade-off, considering the greater situation. Joseon is going to need a leader who can act decisively for the sake of winning, not principle. While a lot of this is necessary because of ethical crises Bang-won himself helped to exacerbate, at this point, what difference does it make? Bang-won was Do-jeon's triggerman. Without that, Do-jeon's ability to enforce order has been badly choked up, which is why he's playing defense at a time when offense is what's necessary to win the day.