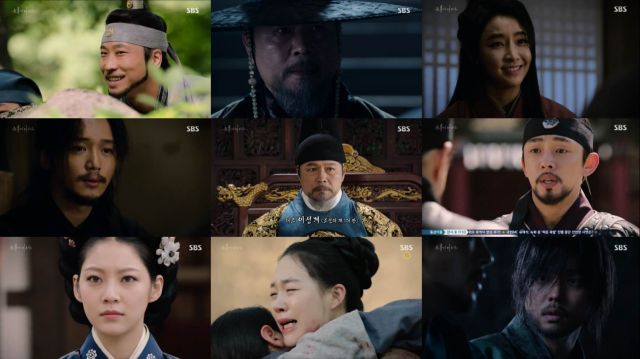 The irony in "Six Flying Dragons" has reached a boiling point. By pushing for military solutions, Do-jeon and Seong-gye have betrayed those most basic principles that got them to fight against Goryeo in the first place. While their intentions and long-term goals are certainly much more defendable that those of the early antagonists in "Six Flying Dragons", what good is intent when the potential pitfalls are so catastrophic? Check the climax for an example of how intent is meaningless when everyone is busy brandishing swords in a panicked manner.

Do-jeon is hoping that Bang-won will be too distracted by the seriousness of war to start too many problems on the domestic end. But for Bang-won, what happens this episode is an almost perfect justification for a power grab. Do-jeon and Seong-gye are somewhat paradoxically relying on Bang-won's good nature to avoid causing trouble. Doesn't this, too, sound like the reasoning used by the early antagonists to maintain control over Seong-gye? That did not work out so well, and Seong-gye is not Bang-won.

Many scenes here build up on previous events in such a way to indicate that for Bang-won's team, this is just the same battle all over again. Consider Na-kyeong's scenes. She's been persecuted in the past for being Bang-won's wife, and has since maintained an active mental disposition in response to future threats. All of Bang-won's collaborators have been adjusting to the pattern of legal bullying. All that's left is for them to take to the streets and make a stand.

And what's Do-jeon doing in between all this disaster? Having optimistic visions about how once this crisis has been solved, everyone will be able to live happily ever after. Do-jeon simply can't see all the myriad ways his plan can go wrong, because he doesn't want to. Do-jeon's moves against Bang-won have empowered people who aren't necessarily the most competent for the task at hand. It can all fall apart so easily. And it will.

It's hard to really call what happens here ominous foreshadowing because it's all so out in the open. Now that "Six Flying Dragons" is almost over, the room for maneuvering is almost completely gone. Really, I kind of wish Bang-won could just be patient enough to become the power behind the throne, given the rapport he has with the crown prince. But there's no time left. For Bang-won, he can either let tragedy happen again, or be the Leviathan that saves Joseon.