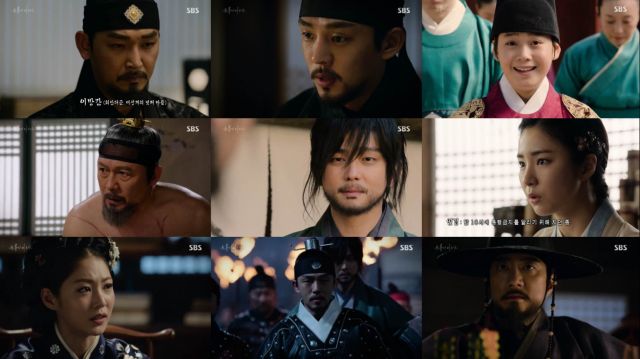 The characters in "Six Flying Dragons" are counting down the days. Bang-won's opportunities to even so much as talk to fellow sympathizers in the government are severely limited, so dates for possible conspiracy have to be fixed and adhered to on a strict schedule. These dates are historical ones, the likes of which can be found in textbooks. That much explains why "Six Flying Dragons" is being specific with the timescale now when normally the exact timing of certain dramatic events has until now been left intentionally vague.

Most of "Six Flying Dragons" has been, technically speaking, a slow burn to finally get to these important events. Oddly enough, the way this episode stalls for time and has its characters wait doesn't inspire much impatience. Bang-won appreciates that his decisions here are momentous, and is giving himself and his allies time to back down. That their resolve never wavers for a moment is proof positive that they're all on the right path.

Truthfully, it's difficult to argue with that at this point. Seong-gye has, as of late, simply been obeying Do-jeon without question, as if Do-jeon was the actual King of Joseon. Most tellingly, the main place whee Seong-gye broke rank was on the issue of putting Do-jeon in possible danger. It's quite obvious to everyone except Seong-gye and Do-jeon that Do-jeon possesses virtually all of the power in Joseon, and that has to end in order for any meaningful progression to be broached.

When even Muhyul helplessly agrees that decisive action, however less than ideal, is necessary to bring a sense of order to the increasingly chaotic Joseon, that's when we know there's a real problem. Boon-yi has pretty good scenes of ambivalence here, too. Muhyul and Boon-yi have lately been functioning less as actual characters and more like barometers to gauge the extent to which Do-jeon or Bang-won can hold the moral high ground. That Boon-yi has not been acting decisively for the sake of Do-jeon is perhaps the most troubling indictment of his government possible.

Well, aside from the more obvious problems anyway. Like Seong-gye getting old and lacking the physical fortitude he once used to. Or for that matter, how the emergency plan for Seong-gye's untimely death is simply to expect the younger princelings to get good advice from their older, better established, more obviously competent adult brothers. Whatever Bang-won's motives are, somebody has to stand up to Do-jeon. It's just a shame it had to be the one guy who has the fewest ethical qualms with murder.