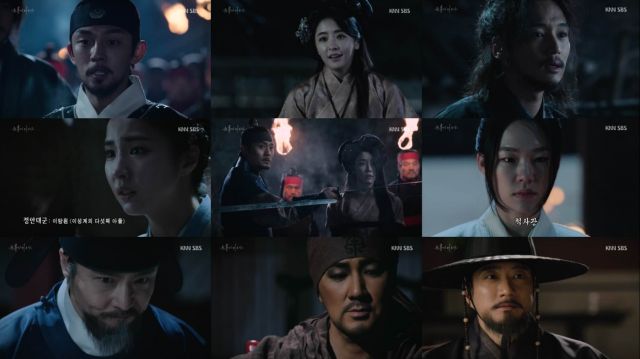 The time has finally arrived- one bloody night, where Bang-won dispatches his most powerful political enemies one by one. And he's only just getting started. Going by the preview the day after is probably going to be even worse. As much as "Six Flying Dragons" has jumped around from making Bang-won seem sympathetic to evil and back to sympathetic again, somehow I just did not feel adequately prepared for the sheer brutal carnage here. The almost manic humor of the situation doesn't help matters.

Most of Bang-won's allies have to some extent functioned as comic relief, and their personalities don't change just because the situation has gotten dead serious. Really, it's frightening too to boot, trying to reconcile the Muhyul who chose to optimistically believe in Bang-won's vision of the future with the grizzled veteran who barely bothers trying to catch his breath having just murdered an unarmed man. The whole ritual with the named scrolls only heightens the atmospheric tension.

Then on the opposite end we have Bang-ji, the man who has always consistently been treated as Muhyul's superior just sort of...collapse in the face of psychological warfare. Where Bang-won's flashbacks reflect his past beliefs in justice, heroism, and how Do-jeon let him down, Bang-ji's flashbacks represent some completely different learned lessons. As Ttang-sae, Bang-ji wanted to escape the vortex of political powerplays. Yeon-hee gave Bang-ji hope, not in Joseon, but in the prospect of a world with real love.

I don't know what's in Bang-won's dream world, and I honestly don't think it even matters anymore. Bang-won himself certainly doesn't seem to care. Observe how cool and indifferent he is to Boon-yi in the closing scenes, and how Boon-yi had at least managed to receive some base consideration from Jeok-ryong of all people. As antagonists go, Jeok-ryong has always had some moral authority just by not particularly enjoying his work that much.

By the way, Jeok-ryong (played by Han Sang-jin) is the monk who's been a minor villainous presence from nearly the very beginning of "Six Flying Dragons". It's a little late for me to introduce characters, I know, but Jeok-ryong has always been just on the periphery, and now I see why. Emotional attachment is what trips characters up here, and the seeds for Bang-won's unquestioned rule are sowed in part by how his allies take orders uncritically and make themselves enjoy it. Always the true Buddhist, Jeok-ryong avoids fighting, not out of compassion, but to avoid inflaming emotions that later on may be beyond all control.