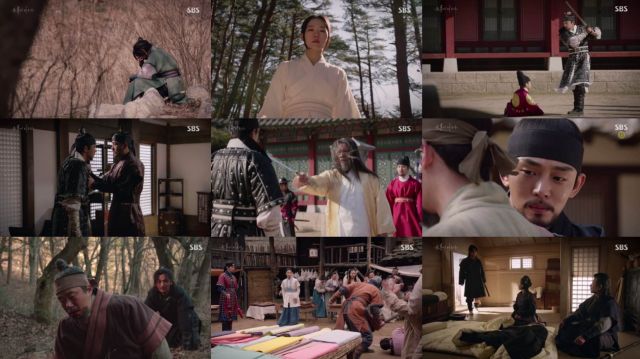 The big grotesque irony about the fight between Bang-ji and Muhyul is that it's completely pointless. For that matter so were Yeon-hee's actions which precipitated the struggle. By the time either Bang-ji or Yeon-hee had any inkling that something was going to happen to Do-jeon, they were already too far away to offer any support. This, oddly enough, is Bang-won's central political argument. Now that it's impossible to stop him, won't striking back simply be wasted effort against the greater good?

Let's recall that, for all Bang-won's quiet moments of inner turmoil, and his general inability to look anyone straight in the eye anymore, that he's still not done yet. Bang-won's family (with one obvious exception) are the only ones he considers indisposable, because blood ties can defy all logic. The military training too, guarantees a certain degree of loyalty and a willingness to follow orders. Scholars, by contrast, can be a lot more wishy-washy.

It's from this backdrop that "Six Flying Dragons" finally coalesces its final alliance- one that serves as a preamble for the conspiracies in "Deep-rooted Tree". I do have to wonder whether that makes "Six Flying Dragons" a tad self-referential. With all the historical figures who could stand up to Bang-won either dead or fully marginilized, all he has left to fight against are fictional characters. And it's also rather weird seeing nearly all of the fictional characters on the same side when until now their sympathies have been fairly divided.

As usual, that's part of the point. If you're an important anonymous figure who associates with a guy like Bang-won, the best way to stay alive is by maintaining anonymity. Do-jeon's big worry about too much bloodletting is that it would have made Joseon weak because there would have been too few competent officials left after the dust had settled. When we consider that the early Joseon period was mostly a success even before King Sejong showed up, that means some capable people must have survived.

That, bizarrely enough, is how Bang-ji looks to honor the spirit of Do-jeon's wishes rather than the man's literal instructions. Which is fitting, considering that's what Yeon-hee would have done, indeed did do, since Do-jeon had made it quite clear that he did not think it necessary for Yeon-hee to make any further sacrifices for the great cause. Beyond all that though, there also remains the last essential human element. How will Boon-yi finally decide to respond, and what, if anything, will that mean for Bang-won's character arc?