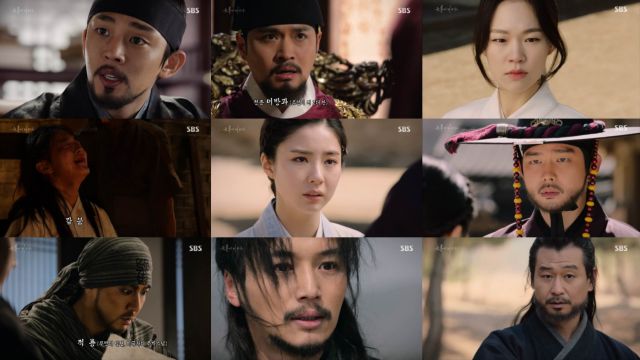 In between real history and "Deep-rooted Tree", there isn't really anywhere "Six Flying Dragons" can go plotwise. We know that for the most part all the main players will live to fight another day. The dramatic tension is instead on how specifically these choices will be made. Bang-won quickly commits to child torture as part of his new regime. Oddly enough this is less jarring than the fact that, with the exception of Boon-yi, he's completely sold out an organization that used to be on his side.

In Bang-won's mind, there's really no choice in the matter. His allies bring up a reasonable fear, and so Bang-won feels the need to make an example. But the entire incident is a betrayal of Bang-won's moral advantage. Do-jeon and Seong-gye worked, sometimes obsessively, to avoid betraying former friends unless no options were available. Bang-won, as the instigator of these inevitable backstabs, now feels that any context is appropriate for brutality in the name of Joseon.

Boon-yi's character in this context takes on some fairly fascinating dimensions because in many ways she's a metaphorical representation of Bang-won's idealism, which lately he's been doing his best to smother to death. The way Boon-yi calls back to old memories is especially sad because we and Bang-won know that she's manipulating the situation to do right by her friends. Yet even now Boon-yi has enough faith in Bang-won's moral characterto try and preserve his safety too.

I hope that doesn't make Boon-yi sound too naïve. That role is more appropriately ascribed to Muhyul, who rather than think tactically, simply expresses his frustrations to Bang-won, and predictably has a much weaker impact. Granted, Muhyul can't really compete anyway, given that he's not a love interest. Even so his decision at the end resonates much the same as Boon-yi's does. Camaraderie trumps loyalty, be that to a cause or a person. The characters in "Six Flying Dragons" fight for their friends.

That's the context within which we arrive at the cliffhanger. Two major fights will close "Six Flying Dragons" out, and while we already probably know how these battles will end, it's the aftermath that will make or break the drama's full thematic reading. Muhyul earns his title of dragon not because he's adept at following orders, but because he finally manages to think for himself and take agency in a chaotic situation rather than taking the role of a reactive soldier. So, too, shall every other character make their bed and lie in it.