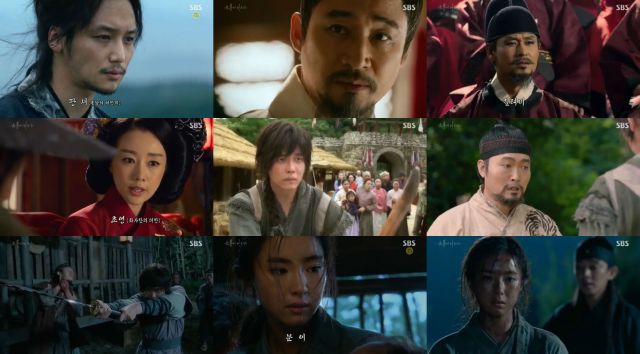 For the first time "Six Flying Dragons" feels like it's about six completely different main characters. That's not a good thing- the mood whiplash gets pretty severe as we have to jump from the usual horrific grimness to comic relief, sometimes in the same scene. If anyone's to blame for this it's Muhyul (played by Yoon Kyun-sang). The guy's too much of a dorky goofball. To some extent this can be charming, but not when the other character in focus is Boon-yi (played by Shin Se-kyung), and she has to deal firsthand with the death which for Muhyul is just an abstract concept.

There might be something to that, come to think of it. Where all the other characters have already managed to get their hands dirty and not even felt guilty about it, Muhyul doesn't seem to appreciate there's a war going on. It's kind of hard to blame the guy, given that he seems to think his life is some sort of romantic comedy. Indeed, while three dragons have gotten together by the climax, by the end of this episode they've managed to separate again.

So yes, it turns out "Six Flying Dragons" is still just doing the introductory portion of the story. I might have been less annoyed by this except that the turnaround from last episode's cliffhanger seemed to imply that the characters were going to start driving toward some sort of specific goal. Unfortunately Bang-won's just bumbling around on his own, as one errand sidetracks him into a mostly unrelated side mission.

"Six Flying Dragons" is slowly starting to test my patience. I'm not angry at the drama just yet. All of the episodes we've seen so far have stressed patience and waiting for the right moment. This is for good reason. Until this episode we hadn't even seen Muhyul at all, which is a bit awkward given that he's one of the dragons. Additionally, while Boon-yi has been through a lot, at the moment it's still not obvious how she can contribute.

Even so, the setpieces are able to make up for most of the issues in the pacing. The aforementioned giant confrontation with three of the dragons, mood whiplash notwithstanding, is great because we get to see how even in adverse circumstances Bang-won really knows how to control a room. The philosophical question he poses is an interesting one- even as it soon becomes clear that hired goons can't be defeated with flowery words alone.