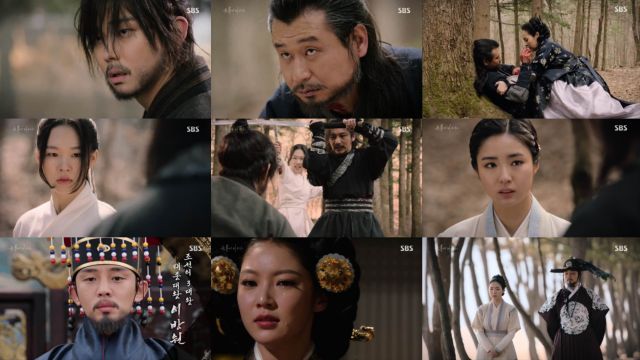 Having whetted our appetite for an epic final fight, "Six Flying Dragons" does not disappoint, providing us with a suitably vicious and climactic battle. Then it drags us down by pointing out the obvious- what's the point of being a supremely powerful swordwielder when a single hero can't win a war, or even their own battles? While Sa-gwang is the more obvious failure, Bang-ji's harsh self-assessment is just as accurate. Little wonder so many of the characters here simply retire here. Until "Deep-rooted Tree" anyway.

But it's Bang-won's self-reflection, as usual, that's the real takeaway. Upon finally gaining the throne, Bang-won rules much the same way he's been running politics lately. He harshly and indiscriminately brutalizes anyone who poses any threat to the power structure. It's good because if Bang-won holds all the power, he can guarantee no one suffers right in front of him. Yet while this arrangement is somewhat better than Goryeo, it lacks ambition. Bang-won has no grand vision or dreams, and that's really rather sad.

Boon-yi, at least, is able to make out a decent living by just having a community she can lead and take care of. Good for her. This is the wavelength she always shared with Bang-won. Yet where Boon-yi is modest, Bang-won thought he could save the world. In absence of a larger threat, Bang-won saves it from itself. It's nice to see how in a certain light Bang-won's flaws weren't really flaws at all, they were just being applied in too high stakes a context.

He did learn something though. Do-jeon, for his own flaws, was proof that a person could have lofty ideals and intellectual insight without necessarily being inflexibly tied to ambition. Bang-won as a father is rather uninspiring, but he makes the critical right decision that sometimes, people deserve to be believed. For all his differences with the other dragons, Bang-won did trust in their ethical scruples, and did not like delegating to them as subordinates.

That's my main overall takeaway from "Six Flying Dragons". While Bang-won may be a capable enough leader on his own, he only truly shined as first among equals. It's sad that the dragons inevitably had to go their own ways, just as it's sad that the ones who survive this drama are destined to be enemies once again in "Deep-rooted Tree". Yet together they were able to forge a new path in history. They were the roots of a golden age- and isn't that, at least, something to be proud of?