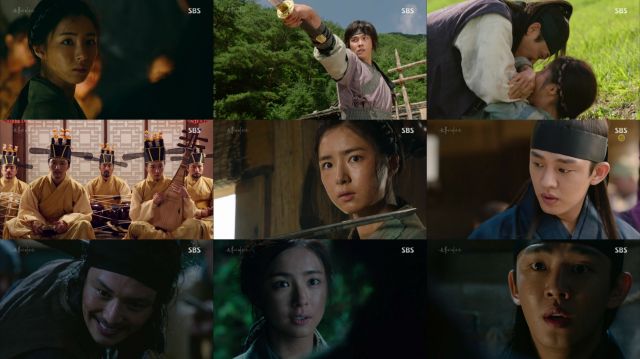 Yeong-gyoo (played by Min Sung-wook) is Bang-won's bodyguard, and also one of the more underrated characters in "Six Flying Dragons". Sure, the guy's not a dragon. But he has very basic observational skills. Yeong-gyoo's the guy who points out that Bang-won's plans never make any sense, and Bang-won always has to struggle to get Yeong-gyoo to help out. While Bang-won is smart he's frequently lacking in any kind of common sense, as is quickly demonstrated when Bang-won tries to commit to a plan without Yeong-gyoo nearby to offer muscle.

It's a good metaphor for the overall muddled state of "Six Flying Dragons" right now- which I am now seeing more easily as a deliberate storytelling choice. The characters act young and stupid because they are still, by and large, young and stupid. Note how for most of this episode Bang-won and Boon-yi aren't trying to start their own revolution, but just collect some basic information on a revolutionary group they already knows exists.

And even then, Ttang-sae is already a member of this group, and he's not perfect at everything either. Take his plan for the confrontation at the temple. While it is indisputably a better plan than the one Bang-won comes up with, it still has a predictably obvious intrinsic flaw. By all rights the temple scene should have been a catastrophic failure for all parties involved except that through sheer dumb luck one dragon happened to be in just the right place at just the right time.

At times the writing in "Six Flying Dragons" seem to rely a tad too much on dramatic coincidence. But let's consider this. The quality and intensity of any given scene improves a lot depending on how many dragons are involved. The main commonality between Bang-won, Boon-yi, Ttang-sae, and Muhyul is that they're all dynamic characters who can and will fight aggressively no matter how obviously hopeless the situation is. The bad guys can wipe out three of them and there will still be one left over.

This is a big reason why I find Yeong-gyoo to be such an interesting contrast. He's a normal sensible person who happens to be good at fighting. But he's not a dragon, because dragons don't give up just because the situation is obviously unwinnable. This attitude gives "Six Flying Dragons" a rare, impressive kinetic energy that's a lot of fun to watch, with a proper adventurous tone to match up with the struggle of history.