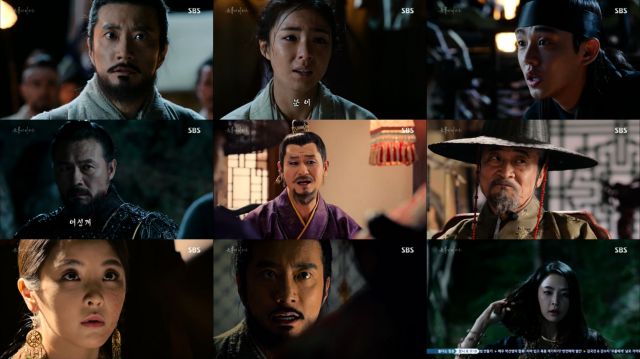 Early on this episode an interesting question is posed that ends up saying a lot about the motivation of several of the dragons. Why Seong-gye? Sure, the guy has honor and morality. But to date he's been pretty determined to defend the Goryeo state now matter how obviously terrible it is. Paradoxically, it's actually Seong-gye's sense of submission that makes him an ideal candidate. He has an iron resolve but no personal ambition. Anyone who has ever met Seong-gye has a strong impression of his moral character. Except Bang-won anyway.

If we ignore the context of history and just posit Bang-won's attitude as being teenage rebellion upon realizing his dad isn't the greatest guy in the world, his character arc makes more sense. I am of course just guessing about that- "Six Flying Dragons" is a fifty episode drama where the ending can be looked up in any history book. But Bang-won's first real act of rebellion here really does demonstrate how his life will most likely be summed up as subverting his father's will in a less explicit way than Do-jeon.

I think it should be noted, even if "Six Flying Dragons" has not mentioned this explicitly that I remember, that Bang-won is only one of Seong-gye's eight children, and he's the fifth son out of six. This is part of why Bang-won's fraudulent plan works this episode. Seong-gye has yet to catch on to to the fact that Bang-won is unusually goal-driven, and he may not manage this until the drama is nearly finished.

It's unsettling to reconcile Bang-won's willingness to betray principles with the weak, vulnerable man he admits himself to be every time he's around, well, every time he's around Boon-yi. Given that Bang-won was a real person and Boon-yi probably wasn't, I suspect Boon-yi's access to Bang-won's inner thoughts is going to become a significant barometer of how deep Bang-won is willing to go. Notary fraud may not seem like a big deal in the wake of all that's been happening, but it's the little things that snowball into big ones.

Unfortunately once the drama moves away from the dragons the proceedings get to be a tad dull. It's not a big problem with the villains persay so much as it is I know these guys can't possibly be around for that long so their indirect politicking just lacks much urgency. The pacing in "Six Flying Dragons" remains slow as usual. Steady to  be sure, but definitely slow.