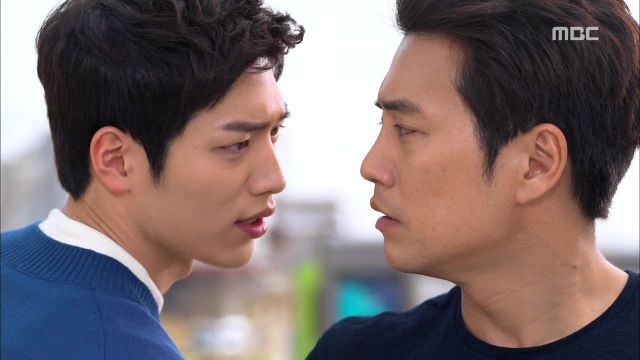 "Sly and Single Again" is at its best when it focuses on comedy. It's witty, quick, fun, and transitions well in camera work, dialogue and between scenes. It is the heavier material that bogs it down.

This is not the fault of the actors who smoothly portray whatever the scene asks of them . Like Lee Min-jung who was particularly strong this episode. Na Ae-ra is beginning to see Cha Jung-woo in a new light, but still sees no future for them. It's a complicated mix of emotions that Min-jeong pulls off effortlessly. What detracts from her efforts, and the rest of the cast, is the strange, choppy editing that occurs when the show turns serious. Most of it occurs where Yeo-jin is involved.

Yeo-jin's character is pretty much a mess. She is unrelatable save when she is in scenes with her loveable brother, Seung-hyun. The set-up of her situation with her missing leg and her tragic past is mostly to blame. It's hard to empathize with her. Had the writer played up her need to be loved despite her leg better, she would've been a much stronger character. Instead, she is easily forgotten when not on screen and startling when she shows up.

This episode was a glorified cockfight between Jung-woo and Seung-hyun over Ae-ra. There were traded words, chicken fights, and pull up contests, all of which were well-timed, well-used and sufficiently entertaining. Not only that, this battle between men highlights how much they have each grown and changed because of their feelings for Ae-ra. Seung-hyun has morphed from an aimless youth into a diligent, goal-oriented young man. Jung-woo built his fortune and success upon proving himself to Ae-ra. Now that he sees what she sacrificed for him, he's in a state of flux as he comes to terms with the reality of their divorce and his renewed feelings for her. Jung-woo seems to be the more stable man because of his career, but it is actually the youthful Seung-hyun who has his wits about him. This is a very effective role reversal.

Along with this competition comes the reveal of the secret relationships that underlie most of the tensions - like Seung-hyun's chaebol status and his relationship with Yeo-jin and Jung-woo. These secrets are a natural tension behind Seung-hyun's love for Ae-ra, and although such secrets are typical Korean drama fare, they are quite effective.

One aspect of this drama I find frustrating is how Ae-ra's family takes advantage of her. Her older brother used her alimony to pay back his debt; her father causes endless financial problems. This episode saw another of her older brother's trouble-making tendencies, and he does nothing to account for his actions. Instead, she's left to shoulder the burden again. This is a pattern Ae-ra needs to change in her life. She allows for this to happen. As a strong-willed woman, I would like for her to display more inner strength concerning her family and not let them abuse her so.

Part of her inability to accept Jung-woo again is because of her financial situation. She isn't in a place to think about starting such a difficult romance again - not with a man who comes with so much baggage. Perhaps this will make her more willing to try and accept Seung-hyun.

If "Sly and Single Again" can learn to balance it's content - the grave and the light - then it will be a very strong show. Not that it isn't entertaining. It's just that it's weaknesses are rather glaring and keep me from fully immersing myself in the joys it has to offer.

"Sly and Single Again" is directed by Ko Dong-seon , written by Lee Ha-na-I and features Lee Min-jung and Joo Sang-wook