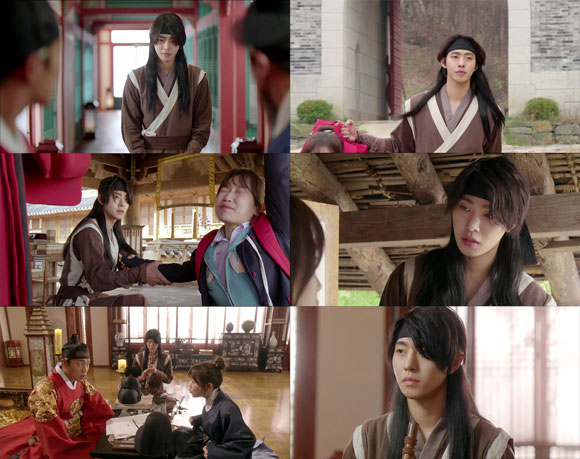 Dan-bi (played by Kim Seul-gi) is a normal high school student who, after some brief exposition, ends up thrown into the Joseon era where King Lee Do (played by Yoon Doo-joon) is desperate for knowledge, specifically of the mathematical variety. As time travel set-ups go this is in fact one of the better ones- Dan-bi's high-school level education may be of little obvious practical use in the present day, but in the distant past this fundamental knowledge legitimately makes her one of the smartest people alive in the world.

When "Splash Splash Love" is focused on the basic cuteness and fish-out-of-water nature of the time travel story, and Dan-bi's educational mission, the drama is generally light and fun. Yoon Doo-joon is his usually charming self as the grumpy impatient King who is willing to tolerate any indignity for the sake of math, much as his character in "Let's Eat" would tolerate any indignity for the sake of good food.

It's the romance that currently has me feeling massively uncomfortable. Dan-bi is a high school student. King Lee Do is in his mid-twenties, and has a wife, Queen Soheon (played by Jin Ki-joo). Also he keeps threatening to chop Dan-bi's arm off. I'm just going to be blunt- this is all horribly creepy. Tropes like "almost kiss the sleeping girl" are iffy even in normal circumstances. In the provided context of "Splash Splash Love", such a scene carries very rapey connotations.

For these reasons I have to suspend just about all my disbelief to even tolerate the romance in "Splash Splash Love". The irritating thing is that the nature of the set-up seems very unnecessary- Kim Seul-gi and Yoon Doo-joon are only two years apart in age. Would it have killed writer/director Kim Ji-hyeon-III to to make Dan-bi a college student or a job-seeker instead? People in their twenties can be immature too you know. Dan-bi did not literally have to be a teenage girl.

While the production values in "Splash Splash Love" are decent, this central element is really putting me off, especially since it makes Dan-bi's decision to stay behind at the end seem like a horribly bad idea inspired by her undeveloped decision making abilities. It also doesn't help that Kim Seul-gi and Yoon Doo-joon have only passable chemistry at best- another essential element for a romantic comedy. For all these glaring flaws, though, I can't help my own morbid curiousity. At only two episodes (ten in webcast format), at least it won't take very long for this drama to get to wherever it's going.