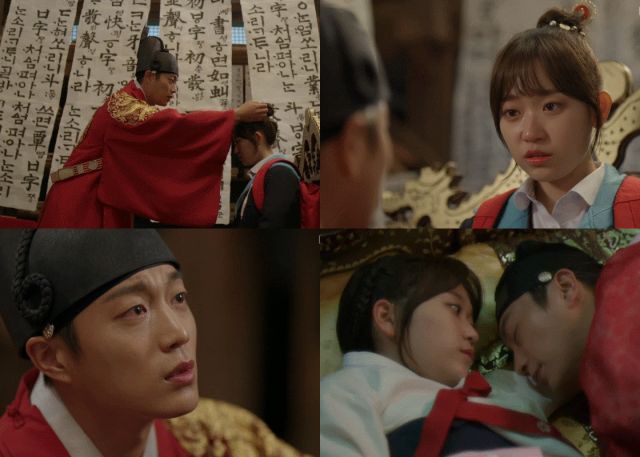 I tried watching the second and final episode of "Splash Splash Love" with more of a relaxed mind. As tempting as it is to attack the drama for illogical character reactions, the premise is a high school girl who teleports by jumping through puddles. One of the highest-tier Korean kings is being played by the leader of Beast. High school textbooks are presented as a literal metaphor for saving your life. Gangnam Style pops up in an educational context. There are rape jokes that are funny mainly because they're being accompanied by silly sound effects.

You know what? Even if I were to try to review "Splash Splash Love" seriously, the drama is too ridiculous to stand for any kind of major critical scrutiny. It's like trying to make fun of a circus clown. I can get maybe two sentences in before I realize that rain-drenched kisses are such an overdone trope in the first place that there is no possible way "Splash Splash Love" could somehow make them less dignified.

I don't think this drama even had any kind of a serious plan. I can visualize writer/director Kim Ji-hyeon-III sitting at the head of the staff table just instructing everyone to write down every potentially funny joke they can think of and they'll try to turn it into a coherent story later. I mean just look at the outtakes at the end. Even the actors are barely capable of pulling any of this off with a straight face. I don't know how they were able to keep themselves together for the more dignified scenes.

It probably helps that the more dignified scenes are mostly just pointing out the obvious flaws in the premise- how it really doesn't make any sense for Dan-bi to consider sticking around in the past. How the Korea of yore has social customs Dan-bi could of course not possibly adhere to. How eventually smart phones run out of battery, and so on, and so forth.

Watching scenes unfold like that I almost feel like I'm being mocked. That's right mister drama critic we know the premise was just a ridiculous ploy to unload a bunch of silly jokes- what are you going to do about it? I guess nothing. I'll sit here and enjoy that incredible soundtrack and try to enjoy myself and just pretend like "Splash Splash Love" works as a metaphor for growing up and finding your place in the world because trying to watch this drama any other way is a hopeless waste of time.