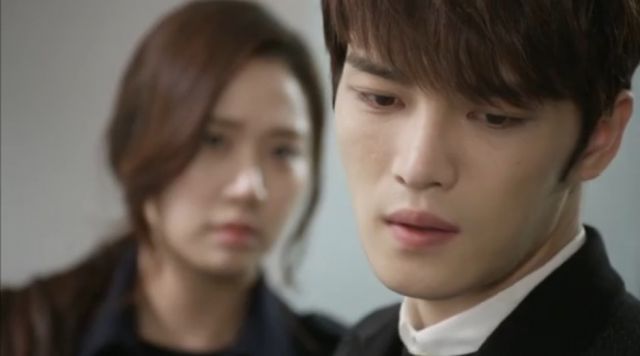 Seon-woo is his usual fumbling self here, making threats he knows he can't deliver on while handcuffed to a woman he knows full well will split at the first opportunity. It's surprising then, that Gi-cheol is the one who manages to come off as not really in control here. The strain of having to juggle so many moving pieces is getting to the man. Hye-rim even manages to get a late stab at his psyche- although overall I'm afraid she doesn't have that much to do.

It's the central irony of "Spy - Drama" really. The main reason the situation has degraded so badly for the good guys is that everyone keeps trying to one-up each other in terms of noble sacrifices. All that extreme work they spent trying to prevent everyone in the family from finding out what's going on- and it was all for nothing. I feel especially bad for Yeong-seo. If Seon-woo's little sister had known she was a potential hostage, she might have done a better job guarding herself.

Anyway, no use crying over spilled identities. The episode is mostly a case study in straightforward spy action. The main twist is that Yoon-jin ultimately decides not to exit the story. The woman's loyalties remain unclear. She's obviously not doing this for the sake of anything as corny as true love. But the situation is complicated enough that no one really has the time to try and puzzle out what Yoon-jin's actual goal is.

To be entirely honest, I kind of glaze over anytime "Spy - Drama" gets into overly complicated discussion regarding the nature of its McGuffin. I'm not sure whether the script is actually trying to get at some sort of metaphorical issue regarding the conflict between North and South Korea, and increasingly I find that I don't really care. It's worth remembering- "Spy - Drama" is based on on an Israeli television show. Beyond general genre outlines I kind of doubt there's any especially specific Korean flavoring here.

Be that as it may, "Spy - Drama" remains reasonably engaging and fun. It's nice to Kim Jae-joong finally do some actual action scenes and spy maneuvering, even if these moments tend to be rather brief. The only worrying factor here is the stretch- crosses and double-crosses are frequently employed less because they seem relevant so much as because it's a way to extend the runtime necessary to get from one cliffhanger to the next.