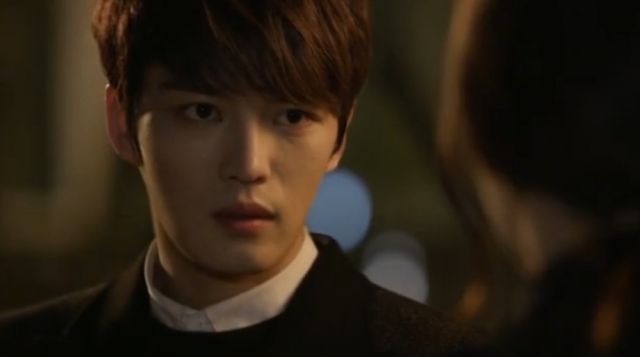 I don't feel comfortable calling the pacing in "Spy - Drama" bad because it tends to be really unusual. The episodes are twenty minutes shorter than the standard for the format, and they also air back-to-back. Be that as it may, this episode got to be really long and tiring, mainly because we had to run around in circles with motivation cross-checks before finally getting to the big confrontation of the cliffhanger, where all the various spy faction manage to coalesce into a single location.

It's not poor storytelling necessarily. It's just that we could have had a much brisker product if this episode and the last had just been combined into one slightly larger whole, with fewer points of exposition. The main scenes that actually turn out to be interesting are the fairly brief ones. Like, say, the implied threat of Seon-woo showing up at your home, playing with your kids, when technically you're all enemies.

In many ways "Spy - Drama" is actually an example of how not to run an effective spy operation. Gi-cheol, you may note, has been threatening families this entire time. But Gi-cheol doesn't really have a coherent goal. He's perfectly all right with burning everything he runs across just so long as it gets him out of the game alive. At this point Gi-cheol is less a representative of North Korea as he is a force of nature to be violently reckoned with.

Joon-hyeok doesn't really have this excuse. To the contrary- he's expecting the fact that he's technically the good guy to carry the day, ignoring the fact that it's actions which determine a person's moral high ground. Not whatever flag they happen to be holding. This is relevant not in the sense that justice always prevails, but in that it makes Joon-hyeok way too cocky. In this way he actually has a lot more in common with the last guy Gi-cheol iced than any of the South Korean characters. Gi-cheol is trying to win the battle- not the war, and that's his main weakness.

It's also at this point the only reason Seon-woo remains a credible threat. Ironically enough he has Joon-hyeok to thank for that. Having to fight against his own people has given Seon-woo a very desperate edge that's turned the entire situation into something erratic- maybe enough to foment victory, maybe not. As is usually the case with good example of the genre, "Spy - Drama" doesn't let on to any obvious solutions here. All we know for sure is that we're quickly running out of characters who can win.