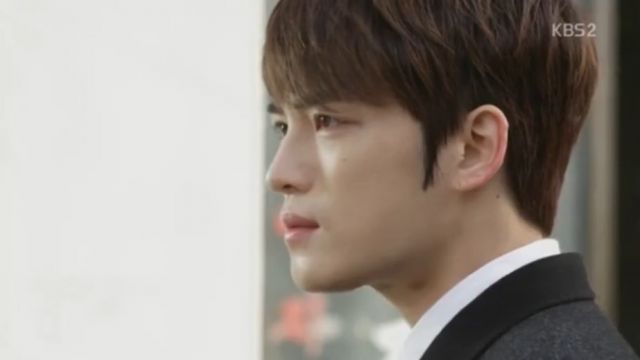 As the shootout indicates, the time for negotiation is over. Seon-woo being, of course, the doof that he is, attempts to further negotiate anyway, and the results are predictably bad. Right to the end both he and Hye-rim are determined to make sacrifices for each other, and right to the end Gi-cheol takes advantage of this fact to make sure all his enemies are more focused on ethical discussion than they are the actual long-term goal.

But then, that conflict has been the main problem for the entirity of "Spy - Drama". Hye-rim, and later on Seon-woo, have consistently failed to realize that protecting their family and protecting the country are not, in fact, mutually exclusive goals. The only reason the situation has gotten this bad in the first place is because the good guys have been consistently incapable of getting their act together. So the dramatic tension here is whether they can win in the end, even given the colossal disadvantages.

As it turns out, though, Gi-cheol has a pretty big disadvantage too. To date he's only ever faced one serious threat in the course of this mission, and that was dispatched through the power of teamwork. The question subtly but unmistakably comes up here- why exactly are all the henchmen hanging out with Gi-cheol? Yes, obviously there's the promise of all the money. But if that's the actual goal, then why does Gi-cheol insist on putting so much effort into maintaining custody of Hye-rim?

Gi-cheol refuses to admit that his emotional attachment is a liability- just the same as with every other character in this drama. Except Seon-woo. The outcome of the armed confrontation would have been enough to sideline the younger spy, but by insisting on making it personal, Gi-cheol ends up putting everyone at risk. In the end it seems like Gi-cheol is poised to be hoist by his own petard- a fitting irony given that Hye-rim increasingly seems to be the only reason he went to all this trouble in the first place.

The simplicity of the action and the true, transparent nature of the character motivations here unveil "Spy - Drama" as being the core concept of an espionage thriller- all that minor detail nitpicking, all for the sake of one final outcome that could be undone at any minute by any possible mistake. It's an interesting enough reversal actually- Gi-cheol may be the best at this game, but he's outnumbered and increasingly running out of cards.