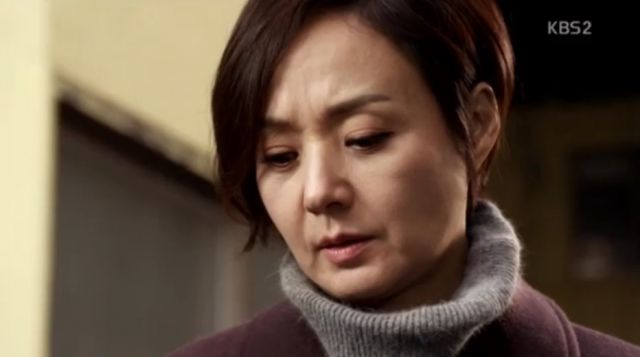 Everyone has screwed up, and now they have to face the consequences for that. Interestingly, even Gi-cheol has to make an apology. While it remains unclear what the greater plan is for Gi-cheol or his bosses, the lethargic pace at which the drama is moving isn't putting him in a much better mood than anyone else. He even apparently gets serious with Hye-rim this time. But once more, he loosens his grip at the last minute.

Seon-woo remains in a mostly uninteresting spot. His apology lacks the dangerous urgency of Hye-rim's- which I again suspect is supposed to demonstrate a difference in spy philosophy between the two Koreas. Both superior officers are untrusting and unforgiving of their subordinates. And yet Gi-cheol actually has good reason to mistrust Hye-rim. The rough time Seon-woo gets seems less an indictment of his willingness to cooperate and more a statement of how the South Koreans only really care about getting their paperwork in proper order.

And yet there's no sense here, like in American takes on the genre, that Seon-woo and Hye-rim need to get their hands dirty in order to beat the bad guys. To the contrary- Hye-rim's first response to Gi-cheol was to try and physically subdue him, yet she failed in spite of having a weapon and the necessary skill to use it. Fighting Gi-cheol on his own terms, to date, hasn't really accomplished much of anything. Woo-seok means well, but however much the man tries, he just isn't a spy.

Spy work, as presented here, is less about crazy action setpieces and more about information management. Which seems like a kind of stupidly obvious revelation, given that this is typically called intelligence work. In many ways this is how "Spy - Drama" distinguishes itself in the genre. The concept isn't really fresh so much as it is just a more logical take on the way these kinds of struggles go down.

To be clear, I'm only reading the drama this way because I'm reasonably well familiar with spy thrillers. "Spy - Drama" is absolutely engaging on its own merits. This is a drama that's very invested in character relationships, and we get hints from Hye-rim's new plan about the best way to tackle a physically superior opponent. There's always another angle. Just so long as everyone stays alive, they get another chance to redefine the rules of the game. That's the real reason why the death in last episode's cliffhanger was such a big deal- it explicitly took a piece off the board.