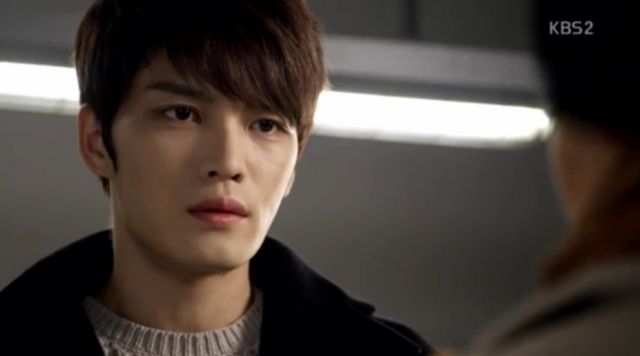 It's another episode of conversations this time- interesting conversations, for what that's worth. Hye-rim's snooping into Yoon-jin's backstory finally comes up with some concrete plot points, and further cements the status of "Spy - Drama" as a story about negotiation, character relationships, and information management. The cumulative effect is an odd one. These are the spy games of a John le Carre novel fused with the social elements of a melodrama.

To be clear, it's an effect I rather like. Note that even though we get access to a lot of information regarding the allegiances of multiple characters, each individual person in the action only has access to a little bit of it. But even from this standpoint, it's pretty obvious that the the victors in this game are the ones who know the most about what's happening. Gi-cheol isn't a threat because he can take Hye-rim down in hand-to-hand combat. He's a threat because the man knows at least some of the backstory and motivation for every other character.

It's an advantage that's narrowing here as Hye-rim finally strikes a balance between appearing like she's cooperating with Gi-cheol when in fact the woman is investigating the true source of his strength. Good spy work, as is well demonstrated here, works through effective shadowing. Hye-rim's deductive abilities are as strong as ever- this makes for a much better angle of attack than trying to engage Gi-cheol on his own terms.

The feminine half of the storyline is so effective here, especially in the context of the cliffhanger, that Seon-woo's adventures unfortunately come off as a bit of a drag. By necessity Seon-woo has to investigate through more traditional, formal channels. I got the sense that Seon-woo has done poorly in part because he has to get approval for everything. Certainly, if we look through past episodes, it seems like collaboration actually manages to achieve worse results than when characters decide to go maverick.

The cliffhanger especially comes off as intriguing because this is the first time we've seen two characters in a room together with an undeniable common interest, yet coming from an undefined point of mutual hostility. This is where guesswork and assumptions are really going to become important. Whatever Gi-cheol is trying to do, it's complex. He's had to order around a lot of people, yet doesn't seem that much closer to his goal. Now that's an exploitable weakness.