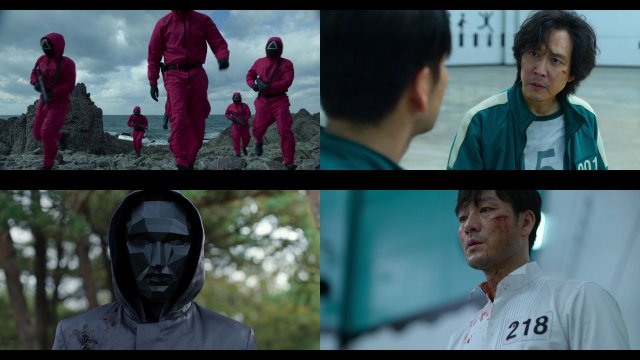 At half an hour in length, the eighth episode of "Squid Game" doesn't give that much to chew on in terms of new developments. It just ties up loose ends. So I'd like to start out by noting that, in American dollars, the total payout for the "Squid Game" is about forty million dollars. It's lot of money. But it's not such an outrageous amount of money that even an indebted person would, with increasingly obviously terrible odds, refuse to question whether it's worth all the trauma.

The big ethical problem with "Squid Game" is that we're expected to identify with characters by intent rather than results. I was surprised when the seventh episode brought up the majority vote option again only to have Sang-woo shout it down by being a bully to the bereaved husband. A better argument was sitting right there in how the bereaved husband would get the payout since supposedly the proceeds go to the next of kin of the losers in the event of a majority vote.

"Squid Game" can't actually address this argument because it would expose the hypocrisy of Ki-hoon's moral authority as protagonist. If anyone actually felt bad about all the dead competitors, the majority vote would indisputedly be the ethical course of action. Ironically, the mere existence of morally questionable characters like Sang-woo and Deok-soo justifies Ki-hoon's own bloodthirstiness. Dead thugs and gangsters obviously don't deserve prize money.

Never mind that since the thugs and gangsters are dead, the money in question would likely go to their long suffering family. The morality is self-satisfying, an unconscious attempt by Ki-hoon to rationalize why his likely quixotic goal deserves more attention than the possibly more solvable ones of his fellow competitors. Even granting that the gamemasters themselves are the real villains, the lack of serious game theory leaves the assumptions of the "Squid Game" unquestioned.

The premise is fraught with moral hazard. No individual implausibility ruins the story, but all of them taken together make it obvious that everything we had seen so far was just an overly convoluted means of setting up a situation wherein Ki-hoon would feel justified in murdering his old friend Sang-woo. Ki-hoon, the laid off factory worker, killing Sang-woo, the failed financier who may well have caused Ki-hoon's factory to be closed. Yet even in exploring complex systems, agency is still presented as being derived at the active individual level- thus ruining the entire anticapitalist critique.