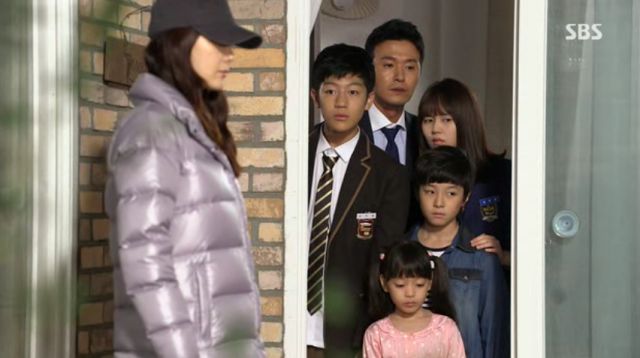 SBS's newest Monday/Tuesday drama, "Suspicious Housekeeper", follows the recent "remake" trend. It is based off of the highly successful 2011 NTV Japanese doroma, Kaseifu no Mita. Director Kim Hyeong-sik ("Ghost - Drama", "I Am Legend", "Sign") teams up with "Mighty Chil-woo"'s writer Baek Woon-cheol and so far they do not disappoint. The first episode was a strong introduction into the world of avoidant father Eun Sang-cheol (Lee Sung-jae) and his four children when his wife dies, leaving them alone and lost.

From the start, the mood is heavy, dark and full of mystery. We meet the "Suspicious Housekeeper", Park Bok-nyeo (Choi Ji-woo) who tells her interviewer that she is willing to do anything ordered, including murder. Sang-cheol's potential mistress, a co-worker named Yoon Song-hwa (Wang Ji-hye), is introduced during his wife's funeral where his youngest has an extremely difficult time coping. She isn't the only one. The oldest child, Eun Han-gyeol played by child star Kim So-hyun, tries to fill her mother's shoes, but cannot despite the fact that her three younger siblings are looking to her for help. She gets little help from Sang-cheol who seems overwhelmed by his wife's death, his children and their needs.

Enter the Suspicious Housekeeper who is robotic in speech and movement as well as extremely literal. The children all have different reactions to her from relief to derision, but they are all glad for someone to take over the chores. Sang-cheol immediately leans on her for parental advice and does some emotional unburdening because she seems so solid. Bok-nyeo follows orders that range from cleaning to setting things on fire! She acts as the catalyst for the children to truly release their emotions. Her literal behavior acts as a reflection of their thoughts and emotions. It will probably teach them all to think before they speak and act. 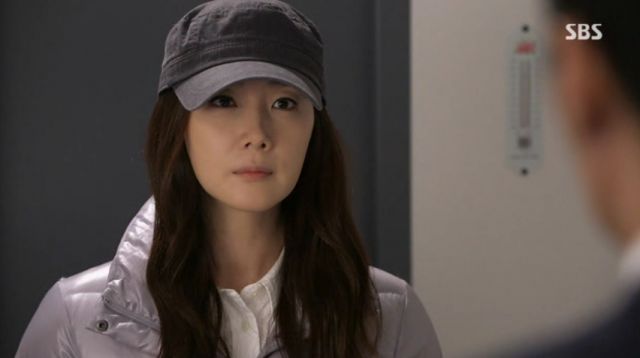 What is wonderful about this setup is the intrigue. There is a stone cold housekeeper who will follow any order. There is a father of four who seems like he's way in over his head and who may have been committing adultery during his marriage. And there are four hurting, angry children who are trying to pick up daddy's slack. They take care of each other. It's easy to fall in love with them and hurt for their situation.

The setup also makes room for comedy. Bok-nyeo is so literal that she will repeat conversations verbatim to the exasperation of others. These repetitions include some hysterically unsavory insults. Her manner of speech is also humorously mimicked by the children who have already latched onto her predictability. She is stable in a time of chaos. She also baffles the nosy ahjumma neighbor who tries to create gossip out of everything and literally hoses her down when she insults the motherless family.

The ending of the episode is frighteningly powerful. Eun Hye-gyeol (Kang Ji-woo), the youngest child, hears from a classmate that there is a way to meet her deceased mother who she desperately misses. She asks Bok-nyeo for help and Bok-nyeo obeys. Instead of going home, Bok-nyeo takes Hye-gyeol to a river and walks her into his while the other children desperately look for her. Their father has no idea what's going on because he's too busy trying to convince Song-hwa to date him. It's incredibly intense and maddening and those emotions are due to the immaculate writing and direction. All the scenes are chopped up and aired in short snippets to heighten tension and highlight the father's neglect and the other siblings' worry.

"Suspicious Housekeeper" started strong. The story is moving, the child actors are wonderfully organic in their portrayals and Lee Sung-jae is very effective as the weak, selfish father. Choi Ji-woo is spot on as the robotic Park Bok-nyeo. Cast chemistry is sizzling. All that is left is for the drama to unfold.