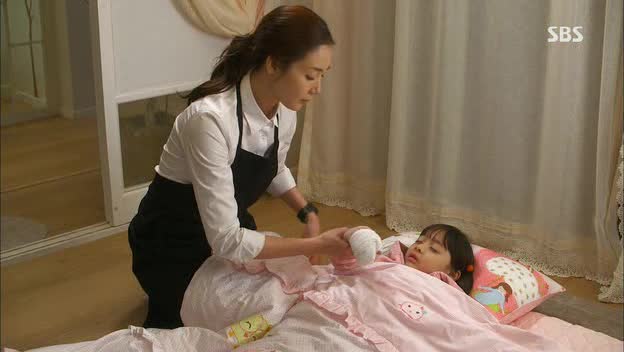 "Suspicious Housekeeper" brought the focus back to family. It highlighted the beauty of having unconditional support and love by juxtaposing it with sociopath Seo Ji-hoon's selfish desire to have Park Bok-nyeo to himself. The battle between the Eun family and Seo Ji-hoon for Park Bok-nyeo has begun in earnest. Unfortunately, Seo Ji-hoon is crazy enough, clever enough and selfish enough to be a very dangerous opponent. 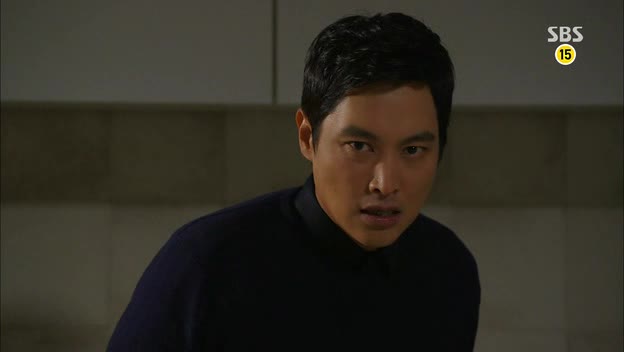 A comparison that the show is trying to establish is one between Seo Ji-hoon and Jay Gatsby from The Great Gatsby. Ji-hoon is made of new money, he loves another man's wife and he sets up lavish scenarios to win her. He is obsessed with the story of The Great Gatsby and throughout the last few episodes has been seen listening to the theme song, using the title of the story as a password and watching the film. He fancies himself Gatsby, which makes me wonder if he's ever made it to the end of the story where Gatsby is shot to death.

But Seo Ji-hoon is no Gatsby. Gatsby was flawed, but he was not evil like Ji-hoon is. The man lives his life around possessing Bok-nyeo. He follows her and plans to extricate her from the Eun family. He even throws a terrifying fit in his house when he discovers how Bok-nyeo acts like a mother to the Eun children - it means she "belongs" to someone else in his eyes. He decides to break her down.

The Eun family, however, tries to build her up. They welcome her and ask her to come to them time and time again. They genuinely care for her and want to be with her. She helped them overcome hardship and now they want to do the same for her. They help her break out of the prison she created for herself. It's the idea of mutual growth that is so powerful and people becoming family by just being together, loving and helping each other. The show often emphasizes the fact that Bok-nyeo won't share meals with the family, but a meal shared isn't the only way to become a family.

Along with the focus on the family and Bok-nyeo, "Suspicious Housekeeper" keeps throwing in scenes that seem out of place, but will maybe connect to the main story later on. Bok-nyeo's boss and childhood friend and guardian has a strange romance going on the with the Eun children's grandfather. He apparently misunderstood her feelings and lived a life of misery after that. Perhaps it's a parallel to Bok-nyeo's misery. Then there is Han-gyeol's ex-boyfriend's issues. He likes her, but is dropping out of school to take care of his father's financial troubles. Last there is the side story with the Eun's neighbor and the fact that her husband is cheating on her. Bok-nyeo's story did mention that her husband potentially cheated on her, but other than that connection, this story seems excess.

Even Song-hwa seems out-of-place. She doesn't need to be there. Her character is so selfish that it won't let go of Sang-chul. She's a character study in-an-of herself. She is creating her own prison by letting her jealousy and pride control her. Despite this, her characters seems to exist just to create more problems. She doesn't feel like a natural part of the story anymore. 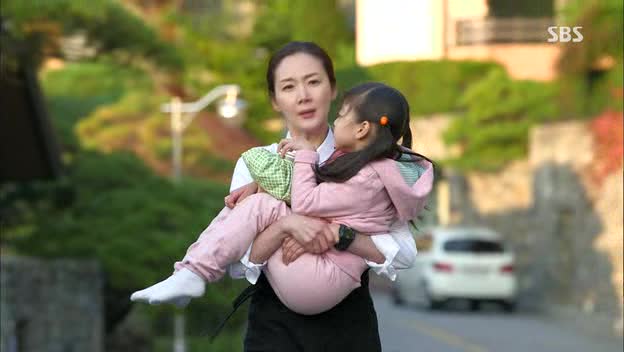 One song choice needs to be commended and that is Lim Kim's "I'm Asking You". It is absolutely a wonderful counterpart to the intense emotional scenes. When the youngest, Hye-gyul, burns herself, a terrified Bok-nyeo runs her to the hospital barefoot. "I'm Asking You" plays, quiet and understated, just like Bok-nyeo's expression of emotion. The scene also is a perfect descriptor of Bok-nyeo's current emotional state: full of fear, self-loathing and guilt. She blames herself for the death of her family and is terrified to hurt this new family she's grown to love. Like Sang-chul told her at the beginning of the episode, she will not forget her past, but she can continue to live. His family offers to take her in and the kids ask her to be their mother. It may be a step she is not ready to take. She's been severely damaged. On top of that, she has Ji-hoon to content with, only she doesn't know it yet.