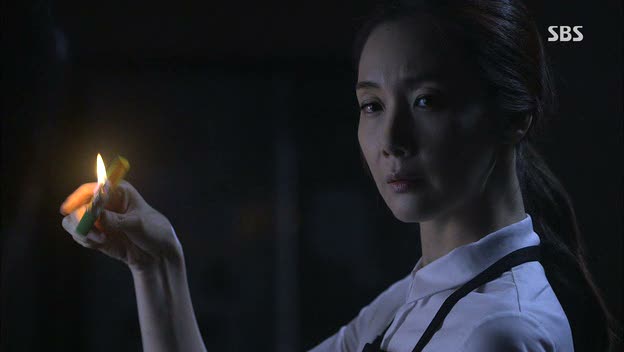 There is something special about "Suspicious Housekeeper". It is compelling and heartfelt. It makes use of stereotypes and tropes without losing the characters' humanity to formula. Rather, it uses formulaic setups to emphasize the human condition. Despite the fact that a character may fall into a typical mold, he still feels and he still and he's still a human being.

"Suspicious Housekeeper" has spent these early episodes on developing each sibling, which is a setup that is normally tedious, but I like to explore each of the children and how the appearance of Bok-nyeo "Suspicious Housekeeper" affects them. This episode focused on the second child, Eun Doo-gyul. As the oldest boy, he feels the need to protect his family with his father out of the house. However, he struggles with how to help and finds himself making a long string of embarrassing mistakes instead in front of Bok-nyeo and the siblings he is trying to protect. 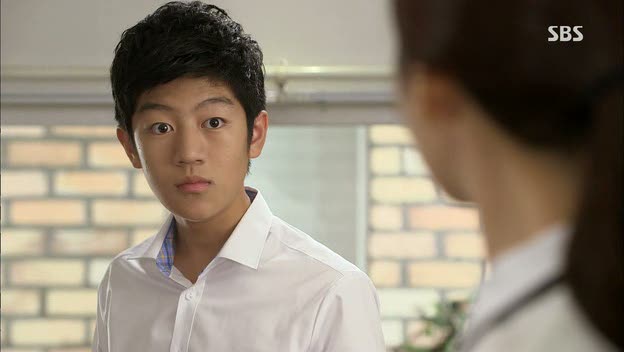 Doo-gyul is the jock of the family: talented in basketball, fiercely loyal, not too bright and hot-tempered. Bok-nyeo handles him differently than the intellectual Se-gyul. Instead of challenging Doo-gyul to think for himself, she doesn't say much of anything and merely allows him to release his pent-up aggression by yelling at her, battling her in video games and basketball. She allows him to try and push boundaries as he grasps for some way to feel like his life isn't spiraling out of control. It's a clever way to highlight the traits of the jock personality, but also to show that each person who fits into a stereotype is still a person. We see why Doo-gyul is acting out and how he feels like his efforts are fruitless.

The trouble-making that Doo-gyul causes also shows how well Bok-nyeo understands people. Throughout the episode, she watches Doo-gyul flail for purchase and at the end, she doesn't judge him; rather, she translates for him. When he catches his nosy neighbor snooping through the family's mail, he assumes she sent the letter that accused Bok-nyeo of being a murder and wants revenge. He orders Bok-nyeo to take it and she does, by spray painting "I want to protect the family" on the neighbor's wall. The words are what Doo-gyul feels and hasn't been able to express. It is an awesome moment to watch Doo-gyul comprehend that someone truly listened to him and now understands him.

Of course, the nosy neighbor catches them and calls the police who Doo-gyul has already seen earlier in the episode for fighting. The nosy neighbor wants Doo-gyul hauled away, but Sang-chul finally takes his first stand as a father and defends his son's good nature to the policeman. It took five episodes, but Sang-chul finally sees what leaving his children alone has done to them. Because he is so selfish, the slow pace of his realization is good - he will need to take baby steps to achieve a gold medal for fatherhood with the nasty track record he has. 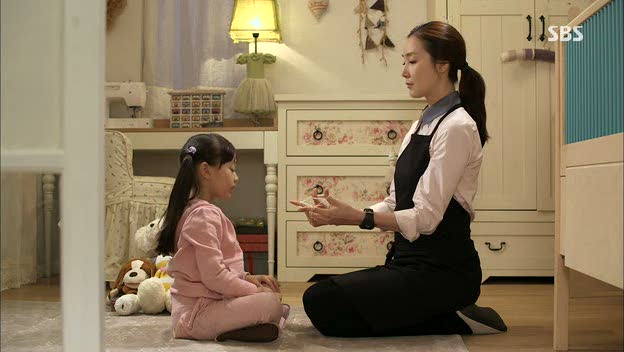 The episode also reveals a teeny, tiny bit more about Bok-nyeo: she won't smile and will quit if ordered to do so. She also has her address registered as the housekeeping company she works for. She is most definitely aware that someone is following her with this kind of secrecy. That, and she disappears when her Stalker gets close. The Stalker is the person sending the "Your housekeeper is a murderer" notes. What is interesting about this situation is that Bok-nyeo seems to know someone is after her and that person is now affecting the Eun familiy. She has brought them into the dangerous world she lives in - what will she do about it?

With a dark heroine like Bok-nyeo, I want to see the family change her, to give her back her ability to smile. After each emotional outburst on the part of a family member, the camera focuses on her face as she observes and it seems like, at times, she is dying to break out of her robotic facade and be as human and feeling as the children are. Choi Ji-woo is doing a fantastic job with the subtleties in this character.

After a slow start, "Suspicious Housekeeper" is starting to get good. I'm invested.