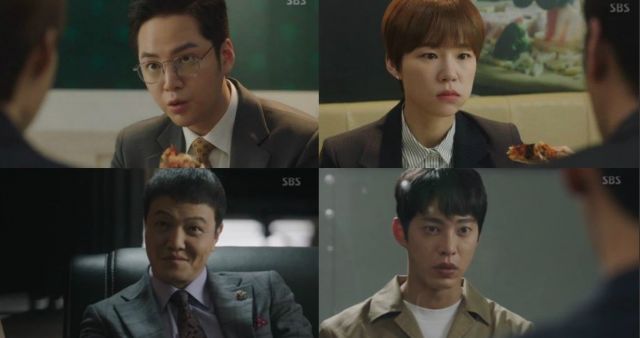 Mr. Kim (played by Song Won-seok) is Tae-woong's right-hand man, and can usually be counted on to threaten people when Tae-woong himself is not available. Unfortunately Mr. Kim has never had much in the way of personality traits. Indeed, we know so little about Mr. Kim that attempts on the part of Joon-soo and Ha-ra to threaten him come off somewhat ambiguously. Before, when Tae-woong's associates were nabbed, their silence was assured by various extended implied blackmail. So what makes Mr. Kim special?

Details on this front prove minimal, since this play at a final strike on Tae-woong has less to do with Mr. Kim's loyalty to Tae-woong and more to do with Do-chan's cleverness and coming up with an effective plan of entrapment. Note that the plan is a lot more clever than it is practical, since Do-chan is alive and well and has to be kept hidden away, rather than providing actual evidence. Previous gambits had the involved criminals more dead to rights.

This lack of follow-through is nothing new for "Switch - Change The World" so at minimum I'm not terribly surprised. "Switch - Change The World" has always professed to be a drama about elaborate cons, and I'm reminded some why it is that these kinds of subjects tend to be popular mainly in feature films. Every time a successful con is finished here, the production team has to contrive an excuse into the next one, never really getting close to success.

But then here the focus should be less on the con anyway, and more on Joon-soo and Ha-ra using prosecutorial influence to try and force the right outcome. There the detail is even less pronounced, because the drama just doesn't have very much going on in the way of decent legal logic. Rules in a good con story have to be established early on so that probably outcomes can be easily speculated on. Without that degree of logic, there's just not much point.

Of course, way more than any of these stricter intricacies regarding worldbuilding, the main problem "Switch - Change The World" has right now is that the proceedings are boring. This is not a good place for a drama to be in when it comes to the climax. Mind, I'm still expecting some explosive setpieces for the final episode or so. Although really, I'd much rather Tae-woong be convincingly outmsarted in a way that's not explicitly contrived.