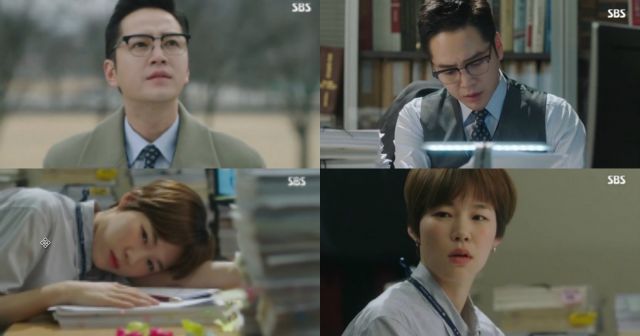 While Do-chan and his team may have initially felt ever so smart for having outwitted the cops, the victory proves pointless almost immediately. In addition to there being yet further interference from still another faction, it turns out that Ha-ra had a back-up plan in case Do-chan turned rogue. Naturally, she still feels the need to swear profusely that the con artist who her colleagues warned her against trusting in the first place ever so predictably tried to double cross the investigation.

Logically, at this point, Ha-ra should just put Do-chan in jail and come up with a better plan. Unfortunately better plans are not forthcoming, so Ha-ra simply orders Do-chan to engage in a more complicated version of the first scheme, with constant possible fail points that predictably appear. For all their philosophical differences Ha-ra and Do-chan are surprisingly in step when it comes to personal arrogance, and refusing to believe that they can fail whatever evidence appears to the contrary.

I'm thankful "Switch - Change The World" is written as a comedy, since in any other genre the bull-headed stupidity of the main characters would be a massive irritation. It helps that Ha-ra and Do-chan are actually pretty competent, and come up with decent plans. The main issue is that they keep underestimating the opposition, resulting in another disastrous cliffhanger where even Do-chan's final gambit accomplishes nothing except possibly giving the bad guys a heads-up.

We also learn more about the conspiracy. Apparently elected official Jeong-pil (played by Lee Jung-gil) is the real villain, it's just Tae-woong that does all the dirty work. Luckily Tae-woong has a tie for every situation. No really, observe how Tae-woong wears a goofy tie or no tie at all depending on who he's talking to and what he's doing. "Switch - Change The World" has quite a bit of tie diversity, and at one point Do-chan is even reprimanded for putting on his tie incorrectly.

Is "Switch - Change The World" actually trying to tell us something with all these ties, or does the wardrobe department just like subtle variations? Well, honestly, it's probably the latter. But I'm a big fan of small details. Observe how much time is just spent on Do-chan and Ha-ra bickering. It's telling how Ha-ra is so hung up on nagging Do-chan that she misses his moment with the child- and the possibility that they can have a working relationship based on something other than mutual blackmail.