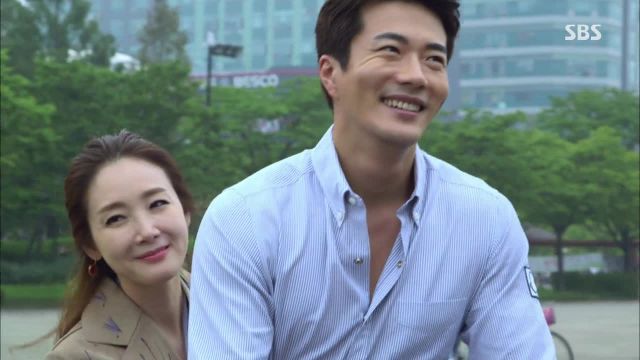 "Temptation" is snowballing into a massive knot of churning emotions and erasing any clear line between right and wrong. Everyone is in an agitated state of mind and not thinking very clearly. This is when the fallout from the divorces can truly be seen, in the aftermath of the emotionally messy affair.

It can best be seen in Hong-joo who is no longer a meek flower who never defends herself. Her bitterness has changed her into a woman out for revenge against the husband who betrayed her and the woman who led him into temptation. She is the only main character who isn't feeling the amorous effects of being in love. Instead, rage colors her vision and she can't see anything but how she was wronged - she can't see her part in the crumbling of her marriage. So she lingers. It's a bleak statement about people who are suffering and how rationality doesn't have a place in their minds.

Unlike his ex-wife, Seok-hoon is trying to move past his broken marriage and thinks he did all he could do to save it. He starts a new relationship with Se-young, which is very sweet. The way the couple is portrayed on camera is quite endearing even though how they became a couple puts a damper on their burgeoning relationship. Seok-hoon is avoiding the messy rubble of his divorce, including how Hong-gyu and his father were hurt by his betrayal. Seok-hoon avoids while Hong-joo seeks revenge.

Lee Jung-shin as Na Hong-gyu has finally come into his own as an actor. He was convincing and his line delivery and facial expressions were dead on. He was very impressive this episode. The efforts behind his acting are no longer visible - instead he has become his character.

Min-woo is an interesting character. He is greedy and egotistical. He fights a neverending battle with Se-young through his company and stakes his pride on it. But when it comes to Hong-joo, he is soft and desperate enough to love her and have her even though she doesn't love him back. It is his first time loving a woman more than himself, and it will yield interesting results as he gets involved in Hong-joo's plans for revenge.

As for his wife, Ji-seon, she is a greedy ladder climber, but she does love her girls. However, her greed and hurt motivate her to take on the powerful Min-woo in a divorce battle. The victims are her children, especially her eldest. The eldest daughter feels loyalty to her mother and therefore feels left out when her other siblings enjoy play time with Hong-joo and Min-woo. I wish the show would focus more on the childrens' plights. This is typical of what happens when families are split and a new parental figure is added into the mix. It also shows how Hong-joo has some responsibility in the failure of her marriage and refuses to acknowledge it - she spent time with another family and ignored her husband.

Last is Se-young who is riding the tides of love and is only given pause when she realizes the widespread effects of divorce. It doesn't only hurt the couple, but families. What this character needs to work on is becoming less two-faced. She has beautiful moments of realization, like realizing what divorce means, and then she is cruel to Hong-joo. She knows it is wrong, but can't seem to help herself.

This show is a big mass of blurred gray lines. Everyone has done something they should atone for, but no one has yet stepped up to admit fault and make amends. That may only happen when someone really gets hurt.