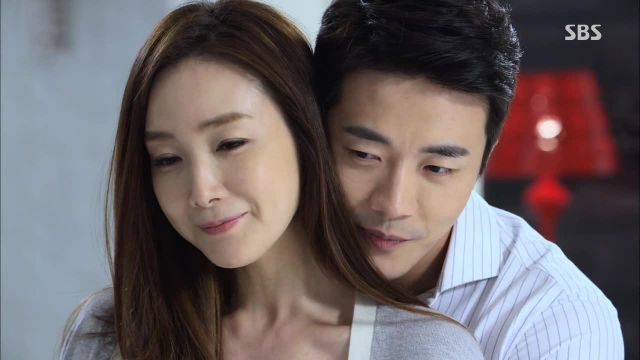 "Temptation" has stagnated in forward movement and become a massive gray area. Anger and hurt fuel half of the characters while the desire to avoid the problems at hand  keeps the other half withdrawn from reality. The plot is made up of characters making constant, consistent mistakes without any sign of improving. Although the mistakes create tension between characters, they don't do much for plot movement.

Hong-joo is a seething mass of righteousness and a desire for revenge. She cannot remove herself from the pit of seething anger she has fallen into. Her desire to marry Min-woo is motivated by it. She even ignores the wishes of her father and Hong-gyu because she can't hear them - she is so deafened by her pain. Her character is interesting because she is currently in a hell mostly of her own making. The basis of her pain does stem from her broken marriage, but it is her inability to accept her situation and move on that makes her so incredibly bitter. It happens all the time to people who have been hurt by others - they create their own misery.

Seok-hoon, on the other hand, is avoiding his marriage issues and focusing on his new relationship. However, when he meets Hong-joo and she asks him to throw away her wedding ring, he can't and seems saddened by her instability. This inability to let go of Hong-joo will manifest itself as time goes by and he's not in the throes of new love. When the show gets to that point it should be interesting. Until then, the buildup to the battles between former lovers is rather circular. Yes, there are business problems that are thrown in for variety, but they don't carry much weight.

Se-young is consumed by her love for Seok-hoon and it is blinding her to the consequences of her actions. Those consequences negatively affect her company and she still seems unable to decide clearly. Despite being a CEO, she is a like a child when it comes to relationships and that is her downfall. Her inexperience in love will affect her keen business mind, but it hasn't quite happened yet. Again, this episode is more about set up than about forward plot movement.

Hong-gyu, Hong-joo's brother, is also colored by anger, but he sees that the fault in the ending of his sister's marriage lies squarely on Hong-joo's and Seok-hoon's shoulders. He doesn't' like the way his sister is going about things, and it's a relief to see someone who sees the situation for what it is: a huge mess that needs working out rather than avoidance or revenge. If he was as irrational as his sister than the show would have no balance to it whatsoever. In fact, the show could use an extra character like him - one who thinks things through.

The show has also attempted to focus on Min-woo's children, but has turned their plight into his ex-wife's revenge. It would be better to focus on how children suffer through divorce. They are also more relatable than the greedy ex-wife.

"Temptation" needs to move forward. Until it does, it is just a teary mess.