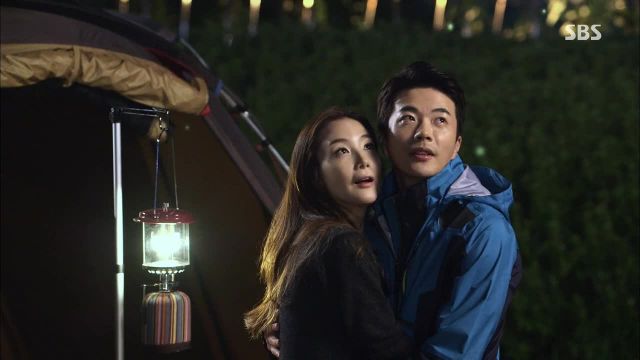 As "Temptation" weathers on, it becomes a more exacerbated version of what came before. Characters change, especially Se-young, but true growth avoids them in favor of more dramatic happenings like feverish revenge. It is sad because there are so many issues that were carefully placed earlier on in the drama, but they are woefully underdeveloped.

The biggest issue that has been mishandled is that of Min-woo's children. His daughter's are suffering through the divorce and losing their mother, the oldest is fuming with anger and feeling betrayed by her father. These are real and present issues of the modern day family, but they find little screen time to develop. Instead, the oldest daughter is shown acting out and we see how it makes Hong-joo feel, but not the source of the daughter's anger or that anger's effect on the other children. The children are being used to show Hong-joo's plight.

They are also being used to bolster Ji-seon's character. The woman states that she is a mother without children, but the writer chooses to focus most on her greed for wealth and power. It is difficult to pity a woman as a forced empty nester when the bulk of her screentime has showed her predisposition for ladder-climbing. She needs to show a little vulnerability, even if only in an introspective scene.

Hong-joo is a character who has been greatly damaged, but who continues to damage herself via revenge rather than seek healing. Marrying Min-woo for the purpose of revenge leaves the rest of her life after the revenge a rather bleak prospect. Revenge is destroying her more than Seok-hoon. This is an interesting character arc to watch except for the fact that it keeps being disrupted by her new living situation. Her difficult mother-in-law and being a stepmother of three should aid in her downward spiral. Instead it makes her entire situation feel disjointed.

In contrast, Se-young is learning how to open up and enjoy life as something more than a working experience. It's quite a beautiful change, but it is tainted by how she got there: she tempted and stole a married man and still doesn't truly realize her wrongdoing. This development in her is overshadowed by the revenge that Hong-joo is executing against Se-young using Min-woo's power. If the writing was tighter, the development wouldn't be overshadowed, but would stand in relief against the darkness.

Seok-hoon is the least changed character. He continues to be more of Se-young's supporter than an independent character. I'd like to see more than just his avoidance of his first marriage and how he's drowning himself in his new love.

Min-woo, on the other hand, is very hard to read, which is the point. We are supposed to wonder whether or not he has really changed because of and for Hong-joo. But again, the way this revenge story arc has been executed has blurred character development by stealing the spotlight. "Temptation" needs more introspective moments with clear camera storytelling and fewer close ups of wedding rings and teary faces.

There is a lot of wasted potential in this show. In terms of provoking emotions, and making the Seok-hoon/Se-young couple winning, it does very well. But overall those two strong points do not carry the drama. There needs to be a better balance between elements, especially when the plot relies so heavily on melodramatic tropes.