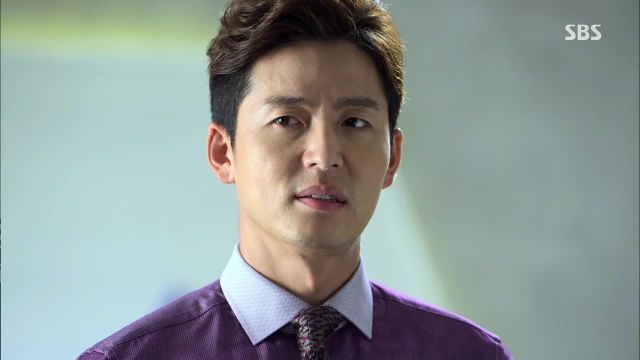 Paths and minds have been twisted beyond repair in "Temptation". Trust has been willfully manipulated by all parties so that nobody trusts anybody else. It's very tense, but a wickedly clever way to keep the plot going. The tension causes fissures that grow into cracks, exposing the characters' true personalities and thoughts. It is a relief because up until now, it has been difficult to read many of them.

The biggest character revelation was Min-woo's. The man is so incredibly selfish that any sincerity of emotion is difficult for him. He glosses over his wrongs with apologizes and fast excuses, never taking any responsibility upon himself. This makes him the most cold-hearted of the main characters, and he is a long way from being broken, much less changed. Lee Jung-jin must be credited with the amount of nuance he gives to such a narcissistic character. Lee is able to bring out the moments when Min-woo almost resembles a human being.

Min-woo's ex-wife Ji-seon is also quite the character. She purposefully plants doubt in both Min-woo's and Hong-joo's minds in order to sever the trust in their marriage - and she succeeds. Min-woo is too selfish to believe Hong-joo, and Min-woo's track record with cheating makes Hong-joo suspect him. It's so insidiously clever that I can't help but admire the writing despite my detestation for such underhanded play.

Amongst two such driven people with little to no moral boundaries Hong-joo doesn't really stand a chance. She finally cracks, unable to stand the pressure of her new position, her cheating husband, the attacks from Ji-seon and Se-young, and the weight of her fury and pain driven revenge. We finally see the Hong-joo from the beginning: the innocent, sweet, mild-mannered woman who could not fathom such a thing as revenge. It is now she sees what we see, that revenge is harder on her that it is on anyone else. She turns to Seok-hoon, the most honest person in this entire mess, which makes this twisty pretzel of a story even twistier.

Se-young is hiding her illness, the token illness that must plague every self-respecting melodrama. It strikes while the metal is hot and the feud between the two couples is at its zenith. Se-young, too, is plagued with doubt, unsure of Seok-hoon's loyalties. More than that, she is battling Min-woo and her pride in a vicious battle between their companies that can only end in disaster. At its core, this story is centers around damaged prides. If people would just admit fault and forgo pride, we wouldn't have much of a story. Unfortunately, Se-young's character is stuck in a business battle and doubting her love so her character doesn't have a chance to continue the beautiful growth it enjoyed in the middle of the drama.

Sadly, Hong-gyu has followed is sister's footsteps and is lying to Se-jin. He knows that they their siblings are at odds, but chooses not to tell her. It draws him into this mess when at first he kept himself so cleanly (albeit painfully) away from it. But such is lying, cheating, and deceit. It draws in the innocent and damages everyone it comes in contact with. The writers of "Temptation" understand this well and use it to their advantage, especially when they create characters as spunky, fun, and loveable as Hong-gyu and Se-jin. They are the innocents who are damaged by the greed of others. Even though this isn't a very happy drama and it hasn't always been strong, when it excels, it does it amazingly. The web of relationships is knotted painfully and I don't see any respite in its future.