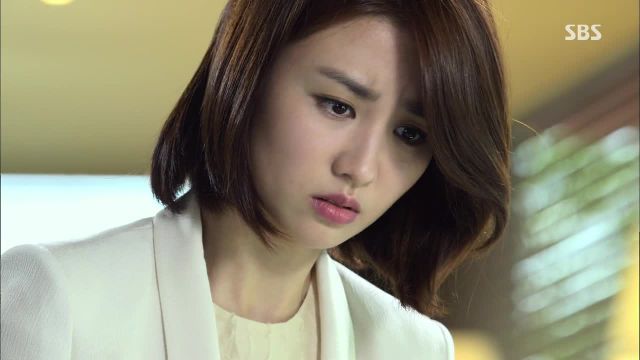 "Temptation" is a whirlwind of deceit, lies, and omissions that keep the tension high and the characters and viewers in a constant state of confusion. There is so much betrayal that there is hardly a moment of respite. Not one character is truthful or forthcoming, which shrouds all of their doings in shadow.

Hong-joo, despite her moment of clarity at the end of the last episode where she realized that she is in way above her head, has turned back towards Min-woo for another attempt to keep her marriage from falling apart. She doesn't want to fail at a marriage again, but this marriage is based on revenge. That means it doesn't have a sound foundation and the show thrives on the crumbling of that weak foundation. Hong-joo may be the most interesting character in terms of development because of how she exacerbated her circumstances and is now drowning in the enormity of the situation. She was genuinely wronged, but now she is wronging herself and others. Her character incites a wealth of emotions in the viewers, and that makes her effectively written.

Min-woo, on the other hand, deserves and receives little pity. He is very much the coldest, cruelest character on the show. He systematically causes harm to others and enjoys it. But he inserts a lot of tension into "Temptation" because he will do anything to win, and that makes him unpredictable. He challenges the other characters to do the same and the dilemmas they face because of it create some of the tensions that propel the show forward. This show is all about tension and people making bad choices that turn them into twisted husks of human beings.

It is also about the dramatic as Se-young's illness progresses into a melodrama staple: cancer. I find her less interesting as time goes on because all the progress she made while dating Seok-hoon degenerates into secret-keeping that brings her back to where she started as a character. Her character has become more stereotypical and less progressive.

Seok-hoon is still difficult to suss out. He wants to do right by everyone, but that is what got him in trouble in the first place. He is sinking into Min-woo's traps, falling purposefully deeper into moral depravity, going against his personal beliefs, turning into another major victim of stress, love, and pain.

Min-woo's mother has no substance as a character save for the fact that she is selfish and cruel, but she does shape a lot of how Min-woo, Hong-joo, her grandchildren, and Ji-seon behave. She is so overly irrational that she is annoying, but she does push the characters around her.

Ji-seon has become ruthless to fight the cunning Min-woo and his viperous mother. As her circumstances become more difficult, she grows more cunning, unlike Hong-joo who collapses under pressure. The character discrepancy becomes more obvious over time.

"Temptation" isn't about the ending. It's about how we get there. The next three episodes are going to be one heck of a ride.