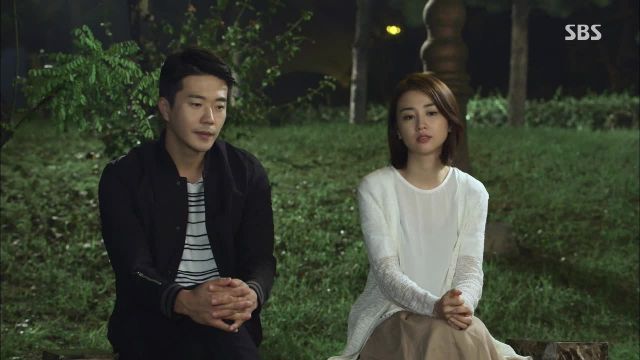 This episode of "Temptation" was another turning point. The characters laid bare their truest feelings and stopped the pretenses that made their relationships so twisted. Despite the medical dramatics, the honesty of emotion was very refreshing.

Hong-joo has been a highlight for the past several episodes as she realizes that revenge harms her as much as it does Se-young and Seok-hoon. It changed her into a person who is the antithesis of her naturally soft-spoken and kind-hearted personality. That change was too difficult for her to sustain, especially because of the unhealthy home environment Min-woo and his mother created. It is good to watch a weak female character transform into someone strong enough to admit her wrongs and remove herself from a poisonous situation. It is the first time she has genuinely taken care of herself since Hong Kong. She goes back home to her father and brother who love and support her. Yes, Hong-gyu fights with her, but it is out of genuine concern for her well-being, something she has lacked for the bulk of the drama.

Min-woo lets Hong-joo leave him though he asks her not to - he does not beg. He is too stuck in his ways, too used to doing whatever he wants to change for her. He seems to love the idea of her more than he actually loves her. Whether or not he realizes the pain he has subjected his family and ex-wives to remains a question. Sometimes people don't change, and Min-woo may be one of them. A character like him is more of a foil for the other main leads than a solid character in and of himself. His mother is an extension of him, and as a character, she is quite dull. She's only there to stir up circumstances and keep a fire lit under Hong-joo's rear end.

Se-young finally stops being a noble idiot, which allow the growth she experienced to shine through. The standstill that the noble idiocy caused in her character growth was stifling to the point of utter apathy on my part. The scenes where she pushed Seok-hoon away became so frequent and repetitive that it was difficult to focus on them. The show seemed to be buying time with idiocy and tears. When written as an open character, Se-young is quite winning. She has a healthy relationship with her loving sister, and is beautifully honest with Seok-hoon - a trait she acquired from him.

However, Seok-hoon, like Min-woo, does not seem to change much over the long, arduous road he has traveled. He certainly tries harder to keep Se-young than he did with Hong-joo, perhaps in an attempt to succeed where he and Hong-joo had failed. But other than that, he is coasting through the show as the nice guy who made a mistake. He doesn't seem truly changed by his broken marriage. It occasionally gives him pause, but the writers didn't show how the experience molded him like it did for Hong-joo.

The last unexplored issue is the relationship between Hong-gyu and Se-jin. Se-jin still doesn't know the relationship between her sister and Hong-gyu's sister. Two episodes really isn't enough time to explore such a revelation and I'm afraid it's going to be a rushed affair. Time could've been devoted to this rather than the numerous and repetitive scenes where Se-young pushed Seok-hoon away.

"Temptation" has some great things going for it. It explores difficult material and has wonderful actors. It just doesn't fulfill its potential because it goes for the most dramatic writing over the most effective development. Hopefully it can reach a satisfying conclusion without resorting to exaggerated emotional dramatics.