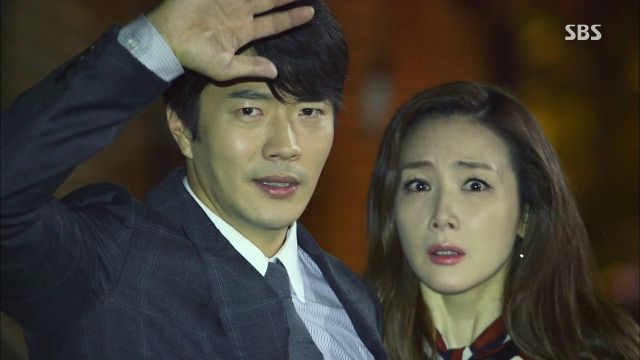 The players take steps towards trying to fix the problems in their lives. While the solutions aren't the most well-advised, efforts are definitely being made. These efforts have taken the story from a mopey stall towards invigorating forward motion.

Seok-hoon has decided to challenge his feelings for his wife Hong-joo and the deliberate temptress Se-young by forcing himself into a position where he sees Se-young everyday . He goes to work for her again under circumstances similar to what put his marriage on the rocks. While the move is logically moronic, story wise it is intriguing to see the turmoil Seok-hoon faces each time he sees Se-young or receives a call or text from Hong-joo.

Hong-joo is an interesting case because she blames Seok-hoon for all of their problems, but takes no responsibility herself. While Seok-hoon does shoulder a hefty part of the blame in the failure of their marriage, Hong-joo never considers her role until Se-young very inappropriately points out her attempted suicide and the pressures that that put on the marriage. She plays the role of the victim who blames and doesn't do much but react to the problems in her life. While Se-young was the catalyst for Hong-joo's marital problems, she is also the catalyst for the change in Hong-joo. Hong-joo is now actively trying to solve problems rather than moping about.

A nice build happened this episode in Min-woo's family. Roy is welcomed only by his grandmother, and essentially shunned by his wife and two older daughters. It is jealousy that fuels Roy's isolation and that is based in his grandmother's favoritism. Now Min-woo has to deal with the suffering he has caused with his cheating and callous attitude towards his wife. He can't just sweep his infidelity and misogynistic behavior under the rug anymore. Hong-joo has pointed out several times that he needs to take responsibility for his actions and this will be a thing he will gradually learn, most likely at his family's expense. While that is tragic, it is wonderful plot stuffs.

As for Se-young, she is an interesting mix of innocent feeling and malicious greed. The burgeoning love (and lust) she feelsfor Seok-hoon is pure. Once she realizes her emotions, however, she systematically plans to act on them, which makes her rather a villainous husband snatcher. Choi Ji-woo plays her in such a way that she is still pitiable despite her morally reprehensible intentions to tempt.

Hong-joo's family is a good addition to the story. I wouldn't mind if they had more screen time. Hong-gyu commiserates with the spoiled Se-jin about being the unfavored children in their respective families. It's a sweet pairing that counters the harsh realities of their siblings' relationships. Hong-joo's father is a sweet, doting man who is perceptive, but not overbearing. It's good to see a solid K-drama parent amongst all the screeching wackos.

There was a distinct change in quality between episodes 5 and 6, which makes me beg for more consistency in the writing. Episode 5 was chock full of set up. While this allowed for episode 6 to reap the benefits, it meant episode 5 was lacking. Hopefully this trend will not continue.