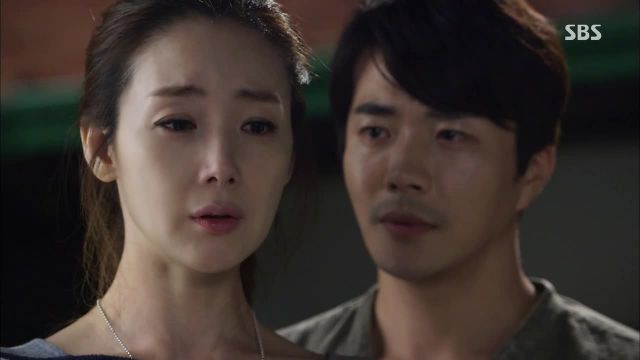 While "Temptation" is still full of moping and brooding, the characters are breaking out of their dark cycles and doing things - for better or for worse. Mostly for worse. Hong-joo, in particular, is cracking and becoming irrational and emotionally unstable. She's keeping things interesting as Seok-hoon and Se-young dance around their feelings for each other and Min-woo deals with his family issues.

Almost every relationship in the show has some connection to Hong-joo and her instability. Roy still misses her as his sisters and step-mother shun him. Although Hong-joo promised to extract herself from his life, she still texts him, reminding him of their comforting relationship. While the relationship gives Roy a sense of security, it is also a crutch for him, Hong-joo and Min-woo. Min-woo especially relies on Hong-joo (and any excuse he can find) to shirk his responsibilities towards his family.

Then there is Hong-joo's immediate family, her father and brother, who experience the fallout of her relationship with Seok-hoon without knowing why she's a basketcase. Her father eventually discovers the marital troubles and is firmly on his daughter's side. It's nice to see a friendly K-drama dad, especially played by veteran Choi Il-hwa, dramaland's resident ahjussi bad guy. Hong-joo's relationship troubles bother her brother less, but they will plague him in the future. He and Se-jin, Se-young's younger sister, are forming a grudging friendship where they commiserate over their places in their families. They are courting disaster because their sisters hate each other. I find this worn plot tool intriguing because the new romance is winsome.

As for the Seok-hoon/Se-young couple, they are barely resisting the temptation of being near each other with all the time they spend together for work. Each moment is plagued by how wrong their relationship is, how it hurts Hong-joo, and by the enjoyment they find in each other. Seok-hoon's proclivity for kindness draws them even closer together, and sparks fly where they shouldn't. Choi Ji-woo and kwon Sang-woo have prodigious amounts of chemistry that makes the relationship even more tempestuous. This couple confesses their feelings although Seok-hoon says that the relationship can go no further because he loves his wife. The irony in all of this is that Seok-hoon is communicating beautifully with Se-young, but hardly at all with his wife, leaving her to imagine the worst - which she does with gusto.

In the end it is Hong-joo who allows her imagination to run into darker territories and hardens herself to her husband. Storywise, this is a smart move because it keeps tension between the married couple who love each other, but have lost trust in the other. Relationship wise, it is foolish. They avoid each other rather than facing their problems head on. The longer they are drawn out, the worse they become: great for television, bad for marriage.