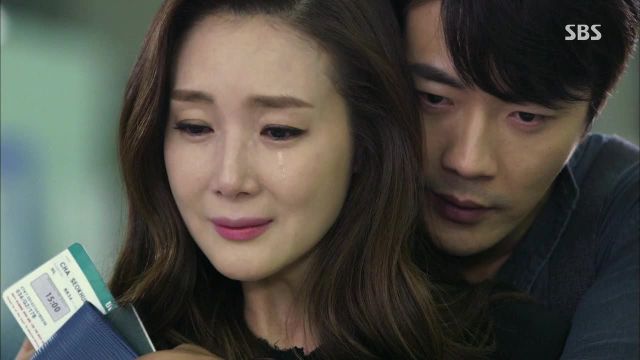 The relationships between the four main characters have made huge shifts after the married couple, Seok-hoon and Hong-joo, settle on divorce to solve their problems. The divorce highlights weaknesses in characters and how they deal with decision-making and their relationships.

An emotionally tumultuous time isn't the best circumstance during which to make major decisions, but it often happens. That is the case with "Temptation". The characters are thrown into an emotional gauntlet and make decisions while running it. Hong-joo decides on divorce as a course of action without speaking or conferring with Seok-hoon, her father, or her brother. Seok-hoon does the same with his decision-making. He works for Se-young's company when he should've stayed away to let his head clear. Instead he's full of his attraction for her and making bad decisions because of it. When they divorce they are also at an emotional high that is more conducive to impulsivity than rationality.

What does come of this emotional insanity is some fine acting on the part of kwon Sang-woo. Even though Seok-hoon's actions and emotions work against my moral conscience, I still empathize with him because of Kwon's spot-on performance. This is where the writing and the direction of "Temptation" excel as well. Despite the moral depravity, it is able to rouse emotions with the timing of the music, camera angles and the line delivery. Se-young's love for Seok-hoon is portrayed so earnestly by Choi Ji-woo that she is pitiable. It is only when I stand outside the situation that my moral warning bells go off. This is the effect that the show was going for for the past eight episodes.

We also gained some insight into Min-woo's character - he is competitive. He treats life, love, business, and family as a competition. He hands his wife, Ji-seon, divorce papers and gives Se-young a business threat, parallel behaviors that prove his inability to lose, and his inability to win without manipulation. He gains perverse pleasure in watching his opponents squirm. Sadly, one of his opponents his his wife. The fallout of that war will be mostly felt by the children. The only good thing of this antagonism between the couple is that we finally get to see her act like a human being while saying goodbye to her children. I want more of this. The more I can relate to a character, the more heavily I feel the impact of their decisions.

Se-young has also reached a turning point. She sees her role in the breakdown on Seok-hoon's marriage, and desperately clings to him when he chooses to go out of the country for business to emotionally recuperate, wanting to love him. It's a new side of her character that we've seen little of - the impulsive side.

"Temptation" is very emotionally heavy, but it is also very vague on its moral guidelines. It needs to be a bit clearer. I find that melodramas that define what is right and wrong no matter the actions of the characters are easier to relate with. Or else I am left mucking about in a quagmire of melodramatic goo. It's very powerful and moving goo, though.