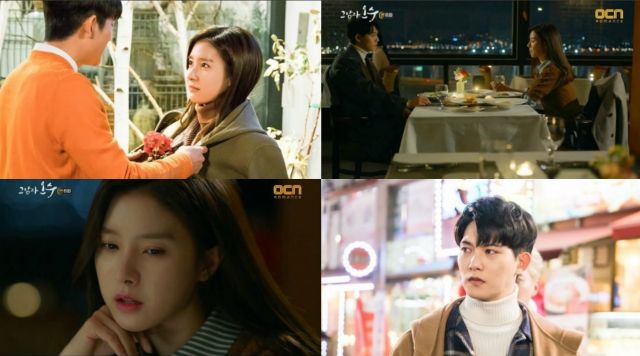 There's a scene early on where Yoo-ri and Jin-woo go to Oh Soo's tea shop. Or is it a café? Oh Soo serves them coffee and claims that he doesn't have anything else, but it's possible Oh Soo is just lying because he doesn't want them there in the first place. Yoo-ri and Jin-woo then leave without drinking their coffee. That ninety second scene was, as far as I can tell, completely pointless, even if it was frequently on the edge of being almost interesting.

That's the feeling I tend to get from watching "That Man Oh Soo" as a whole. The story is so nonexistent that I feel like I'm watching a situation comedy. Granted, when "That Man Oh Soo" embraces that genre and is just about the humor inherent in, say, Oh Soo and Yoo-ri squabbling over the best way to deal with a stubborn lost child, the drama is actually pretty decently amusing. As mentioned previously, I rather like the neighborhood in which Oh Soo and Yoo-ri live.

Then the drama has to go and remind us of more extraneous backstory that six episodes in still hasn't been explained. Apparently Oh Soo also has a robotics job during the day in addition to running the café at night. It's a wonder the guy has time to do anything else. But right when we're about to get maybe a plot involving Oh Soo's robotic background, some random guy shows up with backrubs and then Ga-na is trying to set this new character up on a date.

I have no idea who this character is or where he came from or why he has a backstory, let alone a present story. Most of all I don't understand why writer Jung Yoo-seon has this compulsive need to write meet cute scenes and only meet cute scenes. The whole concept is just weird. Eventually the main characters have to actually start seeing each other on purpose, lest their entire relationship come off as some sort of cosmic accident.

Jin-woo is the more logical romantic lead character simply because he takes random chance encounters with Yoo-mi as a chance to escalate their relationship. By the end Jin-woo is already asking Yoo-mi out on an explicit date. I think that idea is very romantic, that a man would want to spend time with a woman intentionally. Although I guess a normal idea like that can't really segue into the cute scene at the bouncing playground.