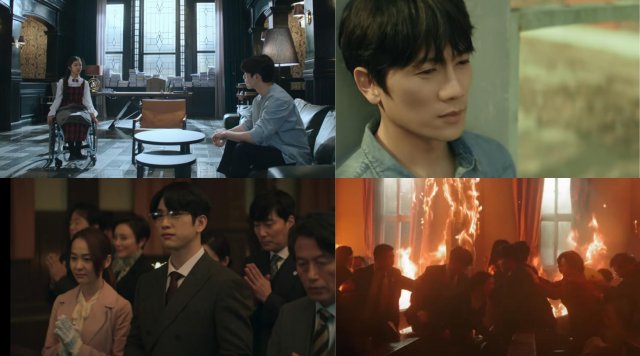 Roughly three distinct acts make up the story of this episode. In the first one, Yo-han finally makes Ga-on leave the house, the "Devil Judge" unsurprisingly having caught on to the fact that Ga-on isn't quite as injured as he's been pretending lately. The two of them then proceed to go to a big party, where various persons with a financial interest in the success of Yo-han's populist TV show about extreme crime and punishment act about as obnoxiously as they can for as long they can.

The seemingly neverending nature of this section is a bit obnoxious. Director Choi Jeong-gyoo doesn't seem to understand which are the good parts of the script that need to be stretched out, and which are the functional backstory that we really don't need that much of. Basically the only important information that we learn is that Seon-ah (played by Kim Min-jung) actually runs the whole sinister conspiracy, as her nominal boss is a pervert of questionable mental faculties.

The story picks up considerably as the show within a show moves into the sentencing phase. After Kyeong-hee decides whether or not to submit to Yo-han's attempt to extortion, the Justice Minister's son is forced to plead for leniency on the basis of affluenza. In a rare moment of understatement for "The Devil Judge" we're mostly left to ponder the attorney's obviously absurd arguments on its own merits. It is thus highly appropriate that Yo-han's counter-proposal is equally absurd- yet tremendously crowd-pleasing.

"The Devil Judge" is at its best when sincerely deliberating over ridiculously extreme ethical arguments like this. While affluenza might be a ridiculous defense, it's based on the same structural appeal to authority as Yo-han's appeal to corporal punishment. I particularly liked how both the arguments Yo-han makes and the actual stock being used are based on traditional Western designs, not traditional Korean ones. Because nothing invented by white people could possibly be savage, especially not democracy.

Sadly this plot hook is cut all too short. Ga-on happens upon some information regarding the mysterious fire that killed Yo-han's family, and "The Devil Judge" spends entirely too much time on this extended dramatic scene with an obviously foregone conclusion. That we close this out with a cryptic shot of Yo-han implying the story he just told was inaccurate in some way just makes that whole buring cathedral scene feel like even more of an unnecessary waste of time.