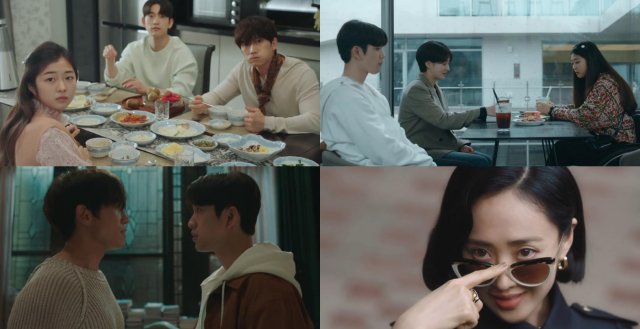 The gothic undertones are not especially subtle. Yo-han is the tragically hated illegitimate son of the brooding master. Seon-ah was the enthusiastic young maid with a penchant for being accused of petty theft. The young Seon-ah's cheerful sociopathy is hilarious. In a moment of bonding with Ga-on, Elijah also mentions the story of how her uncle once made the family maid jump out the window. The actual context behind that story ends up proving extremely appropriate for Seon-ah and Yo-han both.

It's actually a bit of a let-down when that whole sequence comes to an end, since for all this backstory Seon-ah and Yo-han both make it clear that none of this is relevant to their motives in the present day. Soo-hyeon's ongoing investigations feel pointless even before we learn that the breadcrumbs she's been following were just predating a giant marketing stunt. In an unexpected callback, the scene from the first episode where Yo-han was negotiating with the whistleblower takes on renewed relevance.

But the main important exposition from the early episodes that must be kept in mind is that Yo-han's TV show has to be produced. The production team, of whom we see very little here, have to prepare the relevant visual aids and apps ahead of time. So we know that despite events following Yo-han's big public statement being framed as a surprise, everyone directly involved must have known ahead of time exactly what he was planning.

"The Devil Judge" isn't quite well-written enough for me to give the drama too much credit on this presentation. Ironically, Seon-ah is now more interesting as a character but less interesting as a villainness because as is noted, she blew her one chance on a death blow against Yo-han to instead try and manipulate him, which just didn't work. Contrast that with Ga-on having finally succeeded in getting Yo-han and Elijah to eat his delicious cooking- and briefly, irrelevantly, give us a glimpse into his own backstory.