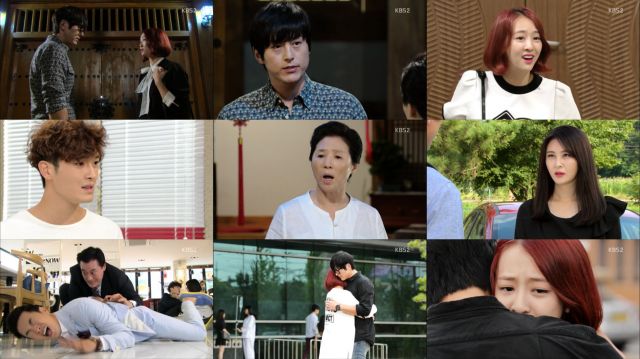 Why exactly do Korean gossip media always refer to romantic relationships as scandals? It's not just a translation thing- as this episode of "The Eccentric Daughter-in-Law" demonstrates, that's literally the word they use to describe these entanglements. My guess is that the industry thinks that "Scandal" just means "something that gets a lot of press". And also I guess celebrities aren't supposed to have romantic relationships for some reason.

If that description sounded non-committal and rambling, well, that's more or less the extent to which "The Eccentric Daughter-in-Law" actually cares about this plot point in the first place. It's not an issue meant to be taken seriously so much as it is just another obstacle intended to stand between In-yeong and Myeong-seok's love. While these characters certainly have their charms the situation of their lives is such that this issue isn't a very convincing one, and as usual I'm less than fully impressed here.

At best "The Eccentric Daughter-in-Law" is able to manage effective cornball humor. Take the entire situation with Se-mi. The confrontation at the restaurant is, while obviously ridiculous, at least funny in its own goofy way. But the denouement is just a load of missed opportunities. Choon-ja's attitude was always framed as being outrageously conservative rather than well meaning, and the fact that the situation just so happened to have borne out these prejudices is just too terribly convenient.

Elsewhere the relationship between Mi-hee and Yeong-ah is just...well, discouraging is the best word I can come up with. I'm assuming that this whole storyline is moving toward some sort of weak redemption arc for Mi-hee as she finally realizes that being a jerk to everyone at every possible time is actually bad, and that framing herself as a martyr only makes the situation more awkward with her son. At least I'm hoping that's where the story is going, or ele that whole arc is just a waste of time.

I guess I can be happy that "The Eccentric Daughter-in-Law" went to the trouble of making character arcs in the first place, but even so. This drama is a pretty standard romantic comedy with the bare minimum interesting high concept. There's been no greater exploration of the ideas inherent in the setting as "The Eccentric Daughter-in-Law" instead focuses on the safe and somewhat boring conflicts reflected in family squabbles and ancestral product. The drama's not terrible- sometimes it's even cute. But even at its best the show just isn't all that intresting.