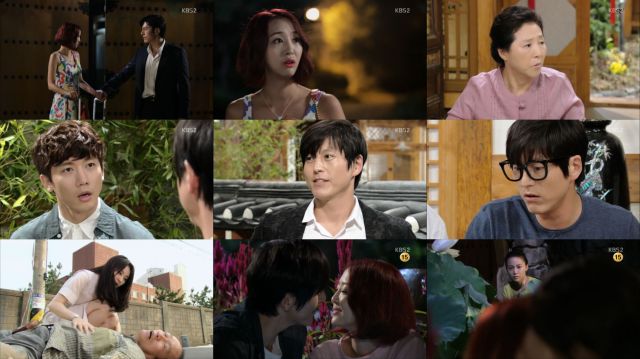 Divorced from the frustrating recent context of the storyline, the opening confrontation between In-yeong and Myeong-seok is actually pretty cute. As it happens, In-yeong does in fact have a flaw that mostly doesn't reflect too badly on her- general cluelessness. It genuinely does not occur to In-yeong that Myeong-seok could have been stoking jealousy by pretending to have a girlfriend even though In-yeong was quite literally running the exact same scam.

Ryu Soo-young and Kim Dasom have much better chemistry when they're dealing with contrived conflict. Not contrived in the sense of the writing being bad, but contrived in the sense that they have to struggle against their own general premeditated stupidity when it comes to dealing with the opposite sex. The sentiment Ryu Soo-young gives off when he makes a pointless greeting in a fancy outfit is funny- especially when we find out why he thought this was a good idea in the first place.

Kim Dasom, too, is a bit of a curiousity portraying a woman who seems much better suited to a life of domesticity than as a girl group singer. While the satire of the original variety show conceit within "The Eccentric Daughter-in-Law" has gotten thinner and thinner, I can appreciate that the main purpose of this appears to be to swing the drama more toward traditional romantic comedy territory. Which works, provided we're seeing the better sides of In-yeong and Myeong-seok rather than the worse ones. Stupid impulsive behavior is much more forgivable if it isn't intended to be malicious.

Which unfortunately doesn't bode very well for the drama's other storylines. Mi-hee's behavior isn't as bad here as it was in has been in other episodes, but it's still genuinely very difficult to feel sorry for the woman or sympathize with her actions in any way. Mi-hee isn't villainous so much as she is just not terribly interesting, and I'm not sure how she can really be convincingly rehabilitated at this point.

Se-mi's storyline suffers from similar issues, although there aren't enough theatrics to make the situation too dangerous...at least not yet anyway. I do have to admit that from a limited vantage point Se-mi's position is a difficult one to justify. But given how stupidly and obviously unreasonable it was for Choon-ja to kick Se-mi out in the first place, well I just don't know. In any case, at the moment "The Eccentric Daughter-in-Law" is managing to be cute enough to prevent me from getting actively angry, so let's just hope the drama will continue to focus on its strengths.