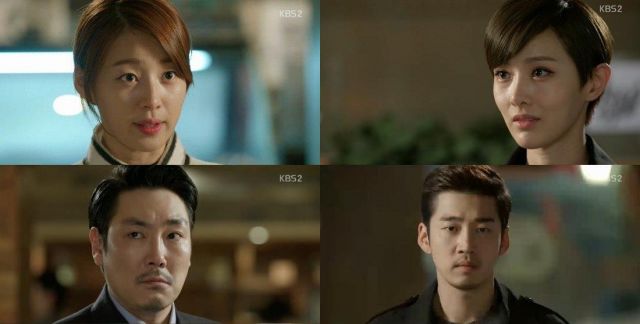 Se-ro gets stuck in a corner regarding bad revelations, so he responds in kind, throwing more bad revelations out at other characters fairly randomly in an effort to to just put an end to the story once and for all. This does not go well, mostly because the con artists and Yeong-won's family simply get another chance to prove that they aren't rational actors, and throw their own shocking revelations at one another in a desperate attempt to...uh...

I give "The Full Sun" a lot of grief for building the plot around a scam that doesn't really make much sense. This episode actually has a pretty good excuse, though, in that the characters themselves are pretty clearly making all this up as they go along. They see Se-ro move, so they decide to move too- more out of some weird sense of personal honor than something useful, like self-preservation. It just puts all of these people in such awful pain to acknowledge the possibility that Se-ro might have the smartest idea here.

The tragedy of it all is that Se-ro isn't really thinking rationally. Where the other characters are just being stubborn, Se-ro is genuinely terrified about the looming disaster that threatens to engulf all the people he loves. Pay attention to the sheer panicked sadness on the man's face every time he faces Yeong-won. He knows she doesn't want to listen to him, knows she has good reasons for this, but he can't bear to see her crushed at the end of it all so he keeps trying.

This isn't a terribly romantic episode largely because the direction does such a good job emphasizing the situation from Yeong-won's point of view. Se-ro appears clingy and controlling. He probably knows this too but without any other decent fallback options this is all the guy's really got. Even though every character at this point is trying to manipulate Yeong-won, Se-ro is the only one who's doing so out of a concern for her well-being rather than paternalism.

The only real complaint I have this time is the drama's general dream-like quality, which persists here even though there's a lot of action. The trouble is this is almost entirely done through dialogue and verbal swordplay, and there's only so many static words I can listen to without getting tired. The occasional burst of quality acting helps to ameliorate these problems somewhat. As is typical, though, "The Full Sun" needs a high state of personal engagement to really warrant paying attention to.